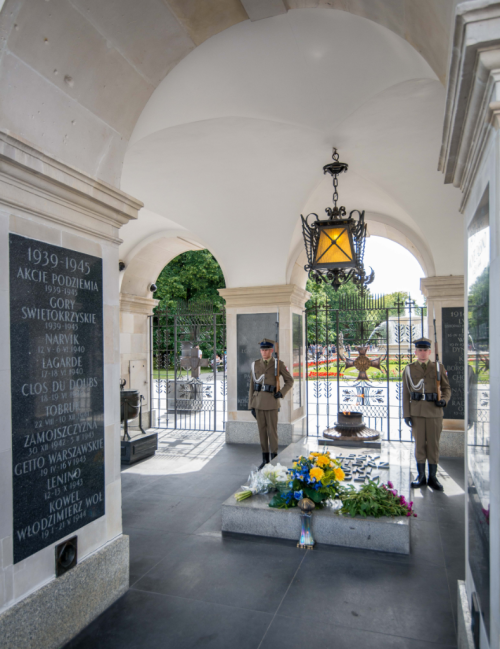 Soldiers provide an honour guard at the tomb of the unknown solider in Warsaw, as they do 24 hours a day throughout the year.

I worked in Warsaw from 1992 to 2003 and have been visiting it in the past three days. Watching a nation rebuild itself on the smouldering ruins of a communist economy had, I think it's fair to say, a profound influence on my life. I had been a Leftist in my callow youth, was a mainstream Thatcherite Conservative when I arrived here in my early 30s but learned, as I watched the Polish people rebuild, that she had not gone nearly far enough. The sheer joyful power of unrestrained market forces was not something I had experienced in the grey, regulated, socialist Britain of that era. It was akin to magic as the invisible hand did its stuff.

In business we talk of "the hog cycle". Demand for pork rises and more farmers switch to pig farming to chase the profit. Supply rises to match demand and prices fall. Too many farmers switch and prices crash. Lots of pig farmers (especially the new, inexperienced ones) go bankrupt. Pig farming becomes unpopular as the risks become clear. Farmers switch to more promising products and supply falls until it meets demand and prices rise again. Farmers will not return immediately to raising pigs when prices rise again because the memory of the last cycle lingers. Only when a new generation that doesn't remember the last crash arrives does production rise again.

All the young people I worked with in early post Communist Poland had grown up in a socialist society with its shortages, corruption and oppression. They went to with a will to build a modern economy and achieved startling success. They had largely done it by the time I left Poland – the Remainers claiming that the EU rebuilt post-communist Eastern Europe don't know what they are talking about. Poles welcomed EU accession as a symbol of acceptance back into the free world but the business people and professionals I know here are – although the country is a net gainer from the EU budget – little more enthusiastic about it than the French and Germans. And let's not forget French and German polls suggest their voters think less of it than the British who may be about to leave!

The children of the youngsters I worked with are now young adults themselves. They regard the Communist era as pure history and are making political noises that suggest a hankering, at some level, for the "good old days". My friends can't understand it but it's really just the political version of the hog cycle. Freedom needs advocates in every generation, no matter how clear the lessons of history may seem to those who lived through it. No battle, however noble, is every finally won.

It was not a great time to visit with Brexit in the air. I wanted to hear about my old friends' careers, families and general health and welfare. They wanted to know if Britain was going to Leave, how I would vote and what were my reasons. Although I had no time to blog, I was talking politics all the time alas. Not least of course when I had a pre-lunch drink with Dick Puddlecote on Sunday! He happened to be in Warsaw for a harm reduction conference and it was good to catch up.

It was a great weekend. I am back in Britain tomorrow in readiness for referendum day.