Beaten into second place (click to enlarge) but the Guardianistas can hardly enjoy the fact that their most-hated TV show came second with 43.3% of the votes. Thank you to all those readers who voted.

The Grauniad is having a poll on "the best TV show of the decade" and the results are annoying its precious journalists.

Monday 2pm: we are aware that there has been some *ahem* multiple voting and we are investigating how to eliminate this. In the meantime, please keep voting - legitimately

Oh, dear. How shocking. I am sure they would never have complained were, say, Andrew Marr's Sunday Socialist Sycophancy Show in the lead. So which show has people clicking so enthusiastically? Yes, there is justice in the Universe occasionally. It's the one they hate the most (click to enlarge). Delicious! Please go over there and add to their pain.

Why must those people spoil everything? 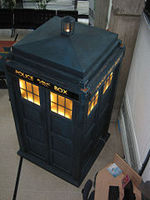 I missed the Christmas Day "Doctor Who" because I was in New York. I am enough of a Whovian for that to hurt, but I was able to catch the repeat. Sadly, that hurt too. Russell T. Davies claims to be a fan, but he has no compunction about littering the show with political points.

The Doctor (as libertarian an anti-authority figure as ever didn't live) scowled at Davies' predictably odious capitalist characters, one of whom was a cowardly cad intent on self-preservation and the other of whom was prepared to kill every living creature on Earth to settle a boardroom feud. I have encountered all sorts of no goods in my business life, but I can't say this is a representative picture.

On the other hand, all Davies' working class characters (of course) are good honest folk with stout hearts This was sometimes, but I have to say not invariably, the case among those proletarians with whom I grew up. Of course, his black proletarians have even stouter hearts, the particular example in the Christmas show reminding me of Boxer from Animal Farm.

I looked forward to watching the Divine Miss Minogue perform. For the first time in her life, she disappointed me. After showing her devotion to diversity by pity-flirting with an implausibly ugly alien, her character made haste to lay down her life for the Doctor, having fallen in love with him on such short acquaintance as to cast severe doubt on her judgment.

How did the man get such a reputation as a writer from such cardboard portrayals? Might it be because his cardboard portrayals satisfy the requirements of the Leftist Establishment? Might his position as the 15th most powerful man in the UK media be based on a sort of sucking-up? Or is he actually as thick as his thin characterisations and richly-bearded 19th Century politics might suggest?

As the closing titles ran, my wife commented wrily, "Right, peasants, now you know what to think." Precisely.

Davies is the sort of Leftist who rarely fails to mention his comprehensive school when interviewed, giving it its full title so as to avoid any suspicion of having been educated. He wears his working-class background as a badge of honour when, logically, that is just as stupid as a Lord being proud of his Norman ancestry. He is so keen to fit the mould of British Leftism that one wonders if even his constantly-mentioned sexuality is genuine. Perhaps his gay partner is a new kind of beard?

Whatever the truth, the insufferably smug Davies, while he is to be praised for reviving Doctor Who,  has gone on almost completely to spoil it with his rancid agitprop. If I could give him his own Tardis, I would. Provided I could rig it to break down on the edge of a black hole.

Visiting with the Sopranos 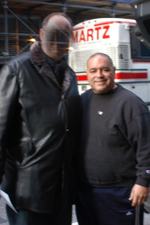 I don't think I have ever mentioned here how much I have enjoyed the TV series, "The Sopranos." Although it is uncomfortable viewing at times (your blogger is a sensitive soul with no appetite for violence) it is also witty, clever and well-written.

As I am in New York, I took the chance to join a bus tour of Sopranos locations around New Jersey. I was nervous that my companions might all be geeks and obsessives, but actually I may have been one of the worst Sopranos geeks there. It was great fun. To my surprise, a cast member turned up - Joe Gannascoli, who plays "Vito" in the series - and I was photographed with him.

Here I am on the steps of the diner where two aspiring young mobsters attempted to "whack" Christopher Moltisanti (played by Michael Imperioli). And here is the commemorative plaque in the booth at Holsten's in Bloomfield, NJ where the final scene of the series was shot. I was photographed there too, in Tony Soprano's last seat (click photos to enlarge).

I had a fun day and didn't think about Gordon Brown or the death of civil liberties in Britain once.

Richard is winning his fight

Link: The Sun Online - News: 'Richard is winning his fight'.

I am no Sun reader, but this is an article everyone should read. Well done Jeremy, and good luck with your fight.