This is  new site to me, but it looks useful. You can make maps and locate people or places on them for information. Then you can embed them in your blog. This example is of members of Second Life who have decided to identify themselves and their Real Life location. I am sure my more tech minded readers can think of better uses. I am pondering whether to create a Blogpower members map for the Blogpower Express. Any other suggested uses? 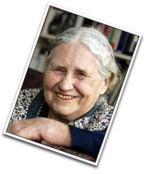 She might as well complain of the inanities of paper. The medium is not, however clever-clever it might have been to say so, the message. That I may now find from my laptop, that which it would have taken me months and many libraries to research, will not cease to amaze me until I die. Yet already it is utterly banal to my children. Yes, I may find porn on the internet. That, I can also find in WH Smith. Yes, I can find inane, poorly-written literature. That, I can find in Waterstones or in a public library. The internet is neutral. Its content can be bad or good. I love and collect books, but they are no more intrinsically superior to words on a screen than was monks' calligraphy on parchment to the printed word.

What a shame that Lessing should have used the platform afforded to her by her Nobel Prize to say something so utterly stupid.

If you are not able to attend a remembrance service in real life, why not attend the one to be held at the 11th hour of the 11th day of the 11th month (GMT) in Second Life? Congratulations to the Royal British Legion for being up to the technological minute. I am having trouble with the broadband connection at my English house, but will try to be there in the person of my SL Avatar, LastDitch Writer.

It may be the future of the internet; a more natural way for people to interact online. For the time being, it's merely a weird alternative universe with six million virtual inhabitants. At times, to be frank, it seems to be populated mainly with sex-crazed teenagers and people trying to sell them pornography.

SL (as it is known) introduces the puzzling concept of virtual sex. Subscribers control their "avatars" (the figures who represent them in SL) in their various contortions. Frankly I can't see the point, but it seems that many can.

After a complaint from a German TV station, the owners of SL have recently ejected a man in his 50's and a woman in her 20's for causing their avatars to indulge in virtual paedophilia. I should have thought it better the sick chap in question gets his kicks digitally, with the aid of a consenting adult, than in real life (or "RL" as it is known in SL).

Germany's legal system is so advanced, apparently, that his virtual actions may have been criminal. O tempora, o mores.

Idiotically, an accountancy watchdog in Britain is calling for regulation, warning that SL could provide a venue for money laundering and other nefarious activity. On the more positive side, a British law firm has just opened an SL office. Sweden is opening an embassy. Mercedes, Toyota and BMW all have showrooms. Some tech companies even hold shareholder meetings there.

If you have a "second life" of your own feel free to look me up. My SL name is "LastDitch Writer" and my house is a dinky chalet proudy flying the cross of St George. Here are eight words I never expected to write. Look out for the Tardis on my lawn.