Now that the blog is being sailed out to battle again I have been battening down the hatches. In its occasional role as a travel journal, it had become a bit cosy in appearance and the sidebar had been put into storage. One of my tasks for the day is to tidy up the "favourite posts" list in the sidebar and delete out-of-date items. In doing so I have been re-reading the posts and have formed a view as to my overall favourite. For the benefit of newer readers, here it is.

It's been a long time since I visited the mischievous pal in Swansea whose party inspired it. Perhaps I should ask for a rematch?

I gave up political blogging for selfish reasons. I felt I had said my piece, that's true. I was afraid of repeating myself, that's also true. But I found it stressful, was dispirited and was seeking to avoid personal conflict with those around me (i.e. most people in my circle) who do not share my views. My career had ended. My marriage had ended with the death of my wife. The life I had known was over. Throwing my blog onto the burning longboat seemed natural.

There are important developments in the political world - some of them encouraging. In a democracy every humble voice should matter but to matter, it must first be heard. There is still no political party in Britain that wants to hear views like mine. I don't own a newspaper or a TV station but I do still have a blog. Candle, darkness, curse etc.

After giving up political blogging I attended an event at the Adam Smith Institute. A few young people inclined to a liberty-driven view of politics were kind enough to buy me a drink and tell me they had had enjoyed reading my posts here. Their own intellect and studies had led them to where they stood politically, but it was good to feel I had encouraged them a little. I have often thought about that since and smiled.

I have also enjoyed reading and watching Trevor Phillips, formerly of the National Union of Students (where I first encountered him in the 1970's) and latterly of the Equalities Commission, express Guardian-annoying views in the past couple of years. It's probably coincidence of course (or a good example of the post hoc ergo propter hoc fallacy) but these views seem to have emerged since an encounter with him at a Battle of Ideas event.

I have strong feelings (and some relevant experience) on the subject of the EU. The voice of the late Mrs Paine has been in my ear on that subject. Years ago, she asked me to stop talking about it because (a) I was becoming a bore and (b) there was no hope of change. But she would have thought it odd for me not to speak about it when there is a chance to fix what she always viewed as an historic national error.

Many drops of water, over time, can form a canyon. Perhaps I owe a duty to drip a little more?

Back in the charts

I don't go in much for statporn here. Goodness knows it would be unstimulating stuff compared to the big boys at the top of the blog charts. I dropped out of the ebuzzing blog charts during my American trip because - presumably - my happy burblings didn't trigger comments, links, tweets and all the other things their algorithms measure. 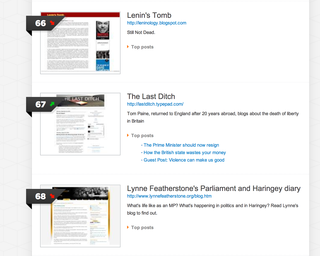 Having resumed my normal more dour service however, The Last Ditch has stormed thirty places or so up the charts to the top of the bottom third of the top hundred.

My ego is not much engaged in that, but it's always good to know that my efforts here are read and appreciated.

Thank you to all who commented, linked and tweeted to such effect.

Google Reader is no more so I need another way to provide links to the blogs I regularly read. I now use Feed.ly as my RSS reader, but it has no capacity to share feeds. Therefore I have decided to use del.icio.us for that purpose.


You will find a link in the sidebar to my "blogroll". These are the blogs I read regularly. I recommend them to you. You will find much there of wisdom, interest and amusement, but I don't necessarily endorse their opinions. I read many bloggers I disagree with; some of them quite violently!


If you feel I am missing out on something I should be reading, please let me know. There's an "email me" link in the sidebar.

I have been looking into the complaints about missing comments and the error was mine. They were simply held up in my spam filter. Please accept my apologies. As a long-standing user of the Typepad platform, I should have been better aware of how it works.

Please click on the email link in the sidebar to let me know if you have such problems in future.  I promise that I will liberate your words of wisdom as rapidly as I can. I shall also be checking the filter every 48 hours.

Blogging will be light to non-existent as I am off to France for a week. I drive from London to Dijon today and then on to the Cote d'Azur tomorrow. I am attending the MIPIM property event in Cannes (as I have every year since 1991). It will not all be business though. I am looking forward to catching up with lots of friends - many of whom are former clients and colleagues. 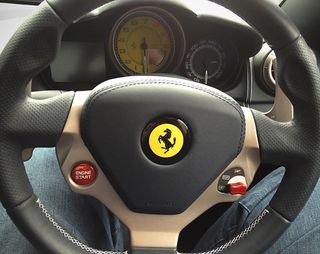 Of course there is also the pleasure of about twenty-four hours in the company of Speranza to look forward to on the autoroutes there and back. I do love to be on the road!

Your comments are always welcome and I am delighted when you post relevant links to support your case. The 'net natives among you should note that you don't need any HTML code to do so. The platform software converts URLs to links automatically. If your link is very long though, could you please use a URL shortener like goo.gl or bitly.com? Otherwise it throws off the formatting, making your comment unreadable.

Where I notice such problems I go into your comment and insert a shortened version of the URL but I am not always around to do so. I often read and reply to comments via email, which means it may be some time before I notice one is wonky. 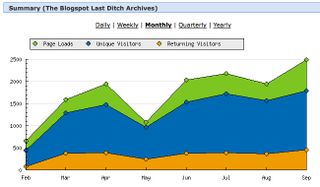 I was wrong when I said I couldn't graph the data for the first 18 months of this blog. StatCounter is able to do it - and here, embarrassingly, are the results. Click to enlarge and laugh, bearing in mind that - like yesterday's - these are monthly figures!

It may interest new bloggers to see how long it took to find readers. Many of my best efforts were in that period, but as you see they were read by virtually no-one. I still don't quite know why I didn't give up, but I would encourage anyone who has something to say to persist. At the very worst, though few of us will make a difference individually, we will together show future historians that we were not the bland, homogeneous mass the mainstream media's archives will suggest.

The third anniversary of the current version of this blog stimulated all this navel-gazing, which I promise will now end. 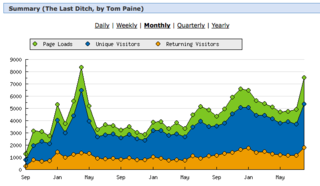 Compared to the big boys, this is nothing I know (click to enlarge and it's still not very big). Still it shows that monthly readership has grown slowly, but steadily, since The Last Ditch moved to Typepad in September 2006. The big early spike, in case you're curious, just shows what happens if you blog against gun control and get picked up by the American blogs. It's a bit sad that the (important) liberty to carry guns is more popular than other liberties, but we must keep trying.

I can't graph the 18 months of The (original) Last Ditch, but the numbers were so small it's perhaps as well.