Time and again, outgoing government employees criticise the administration that employed them. Jonathon Porritt has sucked at the public teat for nine years, without ever a word of criticism, but now he has come over all brave. If the government had taken his advice, presumably it would now have a strong record (as it claims) on environmental policies. If it was not taking his advice, why did he continue to take our money from it? Why was he not principled enough, this paragon of the green virtues, to resign?

Porritt is one of those who claims that green issues are of paramount concern; that the end is nigh for the world if they are not addressed. Yet, for taxpayers' money, he was prepared to keep silent for nine precious years when - as he would now have us believe - the government was failing to address them. When he sneers that Britain is a "...world leader in green rhetoric..." and accuses the government of hypocrisy, does he not see the irony of that?

In a mildly indignant tone, a government spokesman is quoted as saying;

Jonathan Porritt last week praised our Low Carbon Transition Plan which is backed by active steps to make sure firms in the UK grab the growth and job opportunities in nuclear, renewable, electric car and other growth industries.

Ah but yes, dear boy, last week you were still paying him with money looted from us. Prime Minister Balladur of France once cynically observed;

It seems the insufferable, holier-than-thou Greens are more like their political opponents than they pretend.

Posted at 08:09 AM in Climate Change, Corruption, Greenery, Hypocrisy, Snouts in the Trough | Permalink | Comments (1) Does anyone have the graph for London?

Earth Hour in California - Success or Bust? The CAISO Power graph tells the story. « Watts Up With That? 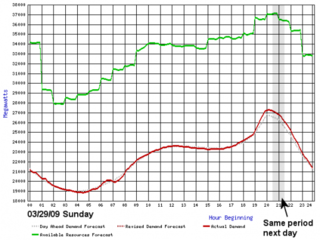 Many thanks to Watts up with that? (a new blog to me) for starting my day with a smile. The festival of smug luddism that was "Earth Hour," much trumpeted by the mainstream media, was widely ignored by consumers. The graphs tell the story, at least in the homeland of the tree-hugging, Toyota Prius-driving Hollywood celeb. The first shows consumption on the day of "Earth Hour". The second is for the next day. Does anyone have comparable UK data?

...that it should have degenerated to this extent.

I may be about to set a record for the shortest membership of a political party. This week, David Cameron having recently announced a policy I agreed with, I sent off my form to join "Conservatives Abroad." Before the form has even reached London however the Conservative Party has managed to infuriate me. According to the Telegraph:


The Conservatives will also suggest - most controversially of all - rationing individuals to as little as a single short-haul flight each year; any further journeys would attract progressively higher taxes, a leaked document entitled Greener Skies suggests.

If this is true, Dave Cameron has lost all touch with reality. The Shadow Chancellor is saying that the proposals will target "frequent flyers," i.e. people like me who fly at least once every month. Anyone who lives that way will tell you we don't do it for frivolous pleasure. We do it because our businesses require it. Businesses that send money back to Britain because our services constitute the country's "invisible exports."

These proposals would spell the end for the City of London. New York is the biggest stock exchange in the world, but only on the basis of American business. The biggest international exchange is in London. Why should that exchange, and the banks and professional firms that serve it, remain in a country that penalises international business? How will they visit, on competitive terms, the foreign businesses they serve?

These proposals would damage Britain's exports generally. Goods don't sell themselves and services need to be delivered in the shape of people flying to the customers to provide them. Better to locate the companies in countries that don't make that as difficult and expensive as possible.

These proposals would spell the end for airlines based in Britain. Since the Tories are talking of penalising anything more than "a single short-haul flight" per year, they would spell the end of a lot more besides. Britain has more expatriates than most countries, because its business is more international . Will Britain's mobile business people be prepared to expatriate, if they and their families will be increasingly cut off from home?

How can a conservative party, supposedly in favour of free markets, seriously advocate rationing? It's quite insane. As they are saying over at Samizdata, the Conservative nostalgia for the past has gone too far:

The Conservative Party has long been regarded as having a certain nostalgic, and some would say romantic, yearning for the past. I had no idea that this included a desire to drag us all back to the 19th Century

Fortunately, before they ever get the chance to kill the City of London, British exports or Britain's international business culture, these policies will kill the Conservative Party.

graphics from the collection of David Levine

I honestly think this is the best confession I have ever read in The Grauniad. One of its writers effectively admits, without a flicker of embarrassment, that he thinks his readers' principles are often just for show.

"Hands up anyone who isn't a hypocrite. Come on, own up. Who out there actually lives by every one of the principles they profess to uphold?"

For the benefit of any passing Guardianistas, please consider that a principle you merely "profess" to uphold is more of an affectation, really. Still, it probably impresses your "right on" friends down at the wine bar every bit as much as a real principle, so don't worry.

On the other hand, if you would like to start living a principled life, perhaps you should use more intellectual rigour when forming your principles? You might consider only adopting those you are able to live up to? You might reflect on the notion that, in professing principles for others to adhere to, while failing to do so yourself, you are following in some fairly unsavoury footsteps.