The Scouring of the Shire

I am striking a better balance now between online and offline. Having taken a blogging break after my Great American Tour, I have returned to a slimmed-down daily diet of blogs old and new, but am restricting consumption to once a day. This, and a serious attempt to get back to regular sleeping habits has helped a lot. I now find I am reading "real" books with pleasure again, without straining to concentrate.

I re-read The Lord of the Rings over the weekend. It's the only novel I have ever returned to more than twice and I long ago lost count of how many times I have re-read it. An index of my success in retraining my concentration is that I found myself looking up a "new" word that I have clearly read umpteen times without noticing; "thrawn". It's a useful one too; very applicable to our modern rulers.

The book seems to have fallen out of favour with the current generation. The Misses Paine cordially dislike it. Nor was their view changed by Peter Jackson's films. They tolerated the first one, but found The Two Towers tedious. I love it myself but acknowledge they have a point. Jackson clearly got carried away with the powers granted him by CGI; manouevering more armies than Tolkien ever did - and marching legions of photogenic elves that never featured in the original.

I read each book and watched each film in turn and noticed all the ways in which Jackson strayed - sometimes justifiably and sometimes not - from his text. For example "The Scouring of the Shire" is one of my favourite chapters of the book but he omits it from the film; his hobbits return to a Shire unaffected by the great events of the story.

In Tolkien's version, of course, the Shire had been much affected. I had forgotten just how out of step with current political "thought" (if mindless conventionalism can be dignified as such) Tolkien's account is. Perhaps one reason why modern social democrats (as most Brits now are) do not take to Tolkien's masterpiece is his account of the practical effects of "Sarumanism" on the hobbits' homeland.

'Taking in folk off-hand like, and eating extra food, and all that,' said Hob.

'What's the matter with the place?' said Merry. 'Has it been a bad year, or what? I thought it had been a fine summer and harvest.'

'Well no, the year's been good enough,' said Hob. 'We grows a lot of food, but we don't rightly know what becomes of it. It's all these "gatherers" and "sharers", I reckon, going around counting and measuring and taking off to storage. They do more gathering than sharing, and we never see most of the stuff again.'

Or how about the career of a "Shirriff" (hobbit policeman) under the new regime?

'We're the First Eastfarthing Troop now. There's hundreds of Shirriffs all told, and they want more, with all these new rules. Most of them are in it against their will, but not all. Even in the Shire there are some as like minding other folk's business and talking big. And there's worse than that: there's a few as does spy-work for the Chief and his Men.'

It strikes me that this chapter of The Lord of the Rings gives as good an account as could be hoped for in modern literature of what it would be like to roll back a social-democratic state. In the story, most hobbits welcome the return of their old freedoms and are happy to be released from the burden of snooping, spying and busybodying. But of course their "gathering/sharing" regime has been in place less than a year. It would be a far more difficult task in the England on which the Shire was so clearly based.

Can readers suggest other passages in modern literature that are as clearly anti-statist?

This award-winning short movie showcasing the CGI talents of Branit FX will resonate with those readers who have experienced the strange delights of building in Second Life. Others may find it of interest too (or not). Apparently it was filmed in a single day but took two years of post-production to complete!

It's not on topic. It's just an artistic diversion for the weekend, so please don't look for any civil liberties meaning!

Scent of a Woman

This film review is 17 years late, but I do not apologise. After all, it's free. Let me explain though. I went to a reception on Saturday; to celebrate the opening of a new office complex in Moscow. The developer is an old friend of mine; a client from my early days in Poland. In fact, I first met him the year the film was released.

It was good to be around success, after another tough week in a very tough market. Over the celebratory drinks and snacks, I met another friend who invited me to have lunch with him and his young daughter. They are alone together in Moscow because his wife/her mother is in Texas, expecting a baby boy.


We talked about a lot of things, but the conversation finally turned to cinema. They are watching all the classic movies together. I guess he's giving her a cultural context as a Russian/American and he could do worse. They are clearly both enjoying it and talked animatedly about the films they had seen. When they asked about my favourite movie, I told them this one and explained why.

As a young man I wanted to be an actor. It was the only artistic thing I was good at and I loved it. When Mrs Paine and I first went out together, aged 17, I had to excuse myself for a month before seeing her again as I was in performance or rehearsal for the next 28 consecutive days. For years I regretted not trying for an acting career, but I had no money behind me and other, incompatible, dreams. You can't raise a family on 11.3 weeks' work a year (the UK average for actors).

As it turned out, lawyering wasn't a bad substitute. There was real theatre in the courtroom when I first qualified, but crime doesn't pay - at least not for the lawyers. If you are going to "sell out", it's important to get full price. So I found theatre instead in the life of a commercial lawyer; particularly in negotiations. I don't claim to know more law than my competitors, but I can stage a better "walk out"  (when the director client wants it).

When I first saw it, this movie convinced me I had made the right choice. Pacino's performance as a blind ex-officer on a "final tour of the pleasures" in New York with young Charlie (Chris O'Donnell), a schoolboy hired to look after him for the Thanksgiving weekend, is monumental. One scene in particular, where he dances the tango with British actress Gabrielle Anwar's character, is superb. Pacino learned the dance for the film. Though the out-of-context clip can't do it justice, just trust me. When you have been set up to watch it by the preceding scenes, it is funny, romantic and touching.

I described the film - and why I loved it - so vividly to my friends that I thought I might have overstated. I have just finished watching it again for the umpteenth time and my conscience is clear. Remade from an Italian original, it is simple and dramatic. The direction is perfectly paced; unhurried, but without a wasted minute. Every shot drives the story forward and pulls you into the characters' lives. If you have a heart, Pacino's performance will be with you all your life. Even the Academy got it artistically right that year. Pacino got "Best Actor," though the film was not a commercial success.

Chris O'Donnell made a great job of his meaty cinema debut, Philip Seymour Hoffman made an early and beautifully crafted appearance. There are also great cameos like Gene Canfield as Manny the limo driver and (in his last movie) Leonard Gaines, as Freddie Bisco, "the grey ghost." Finally, of course, Gabrielle Anwar will go down in movie history for for her nicely understated part in that mesmeric scene.

The final scene when, instead of killing himself as he had planned, Pacino's character becomes so engaged in Charlie's life as to turn up unannounced to speak for him at a school disciplinary hearing would make a stone cry. He delivers a passionate speech about leadership, honesty and integrity that, if I had the Left's approach to education as propaganda, I would want in the national curriculum. I am happy it is safely embedded in "just a movie", where people may happen upon it and be moved.

The film is still not that highly rated by most critics. IMDB has it as only 7.7 out of 10. I am sorry, but the rest of the world is wrong about this. It is my favourite movie and it will take something special to depose it, or Al Pacino, from my awed, respectful affections.

I read and enjoyed Bernhard Schlink's novel The Reader when it was first published in English. I was reluctant to see the film adaptation, as I always am when I like the book. A movie can hardly improve on any but the shortest and lightest of novels, so the risk of disappointment is not usually worth taking. Nor were the reviews encouraging. Those I read had ranged from "high-gloss preposterousness" (Mike McCahill in the Telegraph), through "cold, cerebral work" (Cosmo Landesman in The Times) to "can't help but devalue the horror of the crimes of National Socialism" (Wendy Ide, also in The Times) 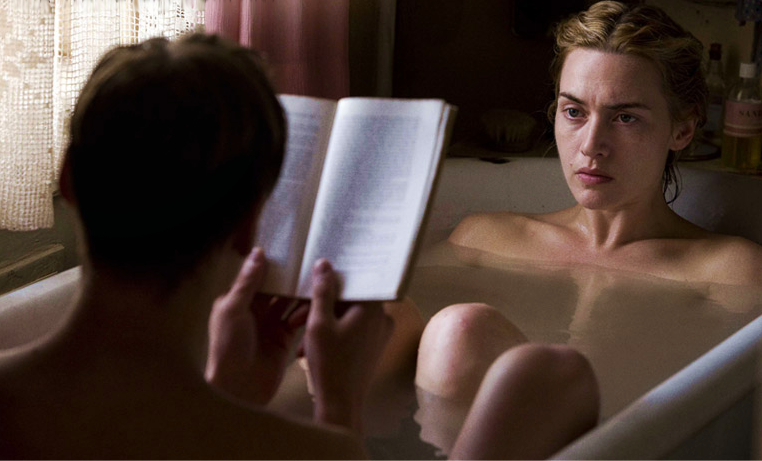 The reviews tell you more about modern Britain than about the film. Ms Ide, for example, misses the point in exactly the way I would have guessed. The recent focus on 20th Century history in British schools has left a cheap, shallow, impression of Nazism (and, by implication the Germans who gave birth to it) as uniquely evil. As a senior, intelligent colleague said to me recently (with terrifying complacency) "a police state couldn't happen here, we are too nice." So, I wanted to cry out, are the Germans "nice". So are the Chinese and so are the Russians. So, I imagine (though I have no personal experience) are the Albanians, the North Koreans and the Cubans. Every human has the potential for good and evil. So it does not "devalue the horror" to show (as the movie does) how a lowly citizen could be drawn into wickedness. Quite the opposite, in fact. If such horror could happen in the most civilised country in Europe, it could most certainly happen here - or anywhere else.

As the afternoon-TV sentimentalism of modern British culture disgusts me, "cold" and "cerebral" are actually encouraging words in a film review. They suggest the movie might actually be "a thinker," rather than the usual cheap tug on the heart-strings. As for "high-gloss" and "preposterous", these must be discounted for British puritanism. As it turned out, they were plain wrong anyway. McCahill must must have mixed up his reviewing notes, as The Reader is anything but either.

Mrs P. wanted to see the movie today. I reasoned that looking at Kate Winslet's naked form could be no hardship, so (though I wanted to see Defiance) I agreed. I am glad I did. Forget the sneering reviews. It is a wonderful film. The screenplay is a spare, elegant and atmospheric adaptation of the book and a fine piece of writing in its own right. The direction moves the story along unhurriedly, but economically. There are several rock-solid performances, not least from dependable Ralph Fiennes (whom I saw recently on stage as Oedipus), but most notably from Miss Winslet. She is the real acting deal. I hope this movie will launch a long career as a serious actress, even after men stop going to her films on the "no hardship" basis I did today.