A chap is entitled to his style

I try not to be provoked by ill-judged political outbursts by my friends on social media. Life’s too short to fix everything someone gets wrong on the internet. Or so my wife tells me. Today, for example, I almost wasted an hour of my life responding to attacks on Jacob Rees-Mogg on my personal Facebook page. This was from friends (one of whom is an English journalist in Russia) commenting on this article in The Independent about the style guide JRM issued to his parliamentary staff, which was leaked to ITN.

My journalist friend said it reminded him of the forlorn attempts of the Académie Française to hold back changes in the French language. One of his friends essayed a witticism by posting this image 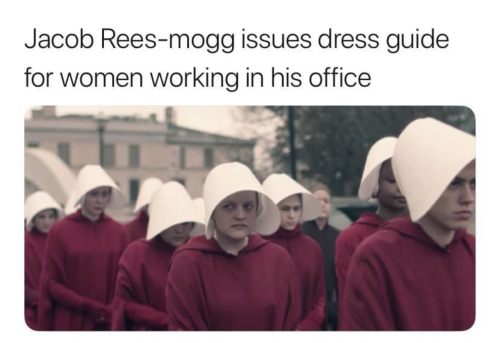 Fair enough, that’s a mildly amusing comic exaggeration but JRM, while not a libertarian, is very much a small state man. Unlike his authoritarian opponents in both his party and others, he wants fewer rules and less state interference with personal choices. It’s ridiculous to compare an office memo to the control-freakery of the Académie Française. He’s not laying down the law, just giving stylistic guidance to his employees. Write to him in your preferred style and they’ll now politely respond to you in his. Where’s the story here?

Yet class-obsessed (though disproportionately posh) journalists have apparently spent hours counting how many times Hansard features JRM using expressions he’s asked his staff to avoid. I understand they’re bored of Brexit. Aren’t we all? But if a free press has value (and I think it does) this strikes me as a poor example of it.

JRM is eccentric. He’s different. He adds to the rich and varied warp and weave of our wonderful society. He very much enhances its cultural diversity, in fact. But as his politics don’t suit the media hive mind, look how intolerant of “difference” journalists truly are. One extra space behind a full stop and he’s a dangerous reactionary!

Let me try to match my friend in Moscow in the field of OTT analogies. It reminds me of how the gentlemen of the press piled in behind Carl Beech when he falsely accused many Tories (and one — Jewish — Labourite) of sexual abuse and even murder. Never mind the facts, never mind the effects on the people concerned and their families. There’s the hated “other” in our sights. Attack!

So much for the kinder, gentler politics the Magic Grandpa promised

These of course are the very same journalists who first systematically ignored and then, when the story broke, downplayed statutory rapes by the thousand so as not to criticise cultural difference in England’s poorer towns. These are the same journalists so carefully weighing the pros and cons of the Jessica Yaniv story in Canada (or in the case of Canadian media so carefully ignoring it). Such courage! Such independence of thought! What was that old rhyme again?

You cannot hope
to bribe or twist,
thank God! the
British journalist.

But, seeing what
the man will do
unbribed, there's
no occasion to.

There. I haven’t wasted that hour. I’ve made a blog post from it. Now shall I send my friend in Moscow a link to it on Facebook ....?

Of poverty and privilege

After less than two years back in Britain I am bored of the first world problems of this plump and pampered land. I am particularly tired, for example, of the overused word "privilege". To me, the great enemy of mankind is not privilege but poverty. Those of us who are not poor represent a problem solved. The question is how to increase the wealth of those who still are. As a purely economic issue, that's a question long since answered.

History shows us that free markets cure poverty fastest. History also shows us that socialism increases poverty. Ask the millions of people in the former Soviet Bloc. It is a stupid, nasty, hateful doctrine; the moral equivalent of deliberately infecting the healthy with disease in order to reduce health inequality.

Socialism's obsession with material goods ignores the fact that the ability to accumulate wealth, important though it is as an engine of economic development, is not that big a deal at a personal level. Faced with my late wife's cancer, our life's savings could ultimately only buy her more comfortable surroundings in which to die. Material rewards for a life of hard work are all very well, but any sane person knows that true happiness comes from things that have little or nothing to do with money; health, culture, education. recreation and family.

There's a wonderful passage in one of Billy Connolly's shows where he talks of a man at a dinner party who, asked what he did, said "I am a tobogganist". Connolly has much fun imagining what his Glaswegian working class father would have said if he had told him that's what he wanted to be. I have recently been reading about the famous photographers Henri Cartier-Bresson and Robert Frank. Both came from rich families. Both walked away confidently from their material comforts (although Frank occasionally took money from his parents to help him along) in order to embark on artistic careers. Their equivalent, if you like, of tobogganing.

The confidence, perhaps even arrogance, of such people about the importance of their life choices derives from the fact that, unlike Billy Connolly (and most working-class children) they have no practical-minded parents telling them, with their best interests at heart, to "get a real job" The confidence, or indulgence, of their parents is helped by money, of course. If you can't support your child for ever, you are understandably more anxious to see him support himself. But their "privilege" was more complicated than that. Their parents did not laugh at them when they aspired to be "tobogganists". Rather, they expected of them, if that's what they were going to do, that they should head for the highest Alp. That expectation is the true nature of privilege.

Yes, it's easier with money but it's also possible without. Chinese children do not do best in Britain's schools because Chinese parents are, on average, richer. They do better because their parents, on average, value education more highly and expect more effort. A "tiger mother" may not feel like a privilege when you are under her care and control, but she is worth more than all the money in the world. Any parent, rich or poor, educated or not, can be a good parent - with better effect on their child's ultimate happiness (and, incidentally, the nation's prosperity) than any redistribution of wealth.

I remember two long-lost school friends in my scruffy home town up North. Their father was a dustman devoid of all aspiration. Their mother, however, had a dream. Both arrived at infants school able to read because she had pushed them around town in their prams teaching them to do so from the road signs. Unashamedly eccentric herself, she empowered them to be different from their contemporaries and not to give a damn about the relentless peer pressure to be stupid at our bog-standard comprehensive school.

She wasn't Chinese. She was from the white working class; now the second-worst performing ethnic group in Britain's schools. She did nothing any parent, grand-parent or aunt - rich or poor - could not do. I wish all the whingeing envy-ridden half-wits banging on about "privilege" would shut up and be like that scruffy, oddball, utterly splendid mother. She refused to be defined by her circumstances. So - if we have any dignity - should we all.

If you have economically under-privileged kids, if you teach them, are related to them or even just have them as neighbours don't tell them they are doomed. Don't encourage them to hatred and envy. Encourage them to dream of "tobogganing" and lend them the occasional book. Let them see you reading for pleasure (pretend if you have to) so they think of it as normal. Then they will be privileged kids too.