Posts categorized "Blog of the Week"

Burning our money: What If There Is No Growth To Share?

Link: Burning our money: What If There Is No Growth To Share?.

When Wat Tyler is on form, the rest of us might as well stay quiet. His "picture book version of the Forsyth Tax Commission Report" should be studied by all. I defy you to read the linked post and retain any shred of belief in the great myth of recent British politics; Labour's "economic competence." In truth, they have taxed and spent, just as they always do. It is the only idea they have ever had and a very destructive idea it has always been.

The effects this time have been masked by imprudent borrowing (by Government and individuals). Cheap credit has made cars and holidays easy to "afford" and the resulting feelgood factor has kept Labour in position for longer than usual. The result is even more damage than they usually do. When property prices adjust to reality, everyone will find themselves as poor as they have always been (but were too busy spending borrowed money to notice). What fools we mortals be.

Do please read the whole thing. And subscribe to "Burning our Money" while you are about it.

Blogs of the week at the Last Ditch are rather like buses. Here a week can be an elastic concept. Be that as it may, "As a Dodo" is one of the best-written sites on the internet, and today's post is an erudite and humorous classic. Enjoy.

My "blog of the week" is an irregular and highly moveable feast. Since it burst on the scene with his amazing first post, Dan Hardie's Weblog has been in the frame. This post on the British military (and its political masters) during and after the Falklands War is well worth a careful read.

The prigs at Alcohol Concern believe (like so many other Statist swine) that they know better than us how to bring up our children. Both my daughters were introduced gradually to alcohol from a young age in the French manner, with a view to their learning to appreciate quality wine in joyful moderation. Understandably, Alcohol Concern's demand to criminalise such an approach, has brought Devil's Kitchen into full, fine, fulminating, foul-mouthed form:

Personally, I shall be sending a letter to Alcohol Concern, expressing my concern at their authoritarian tendencies. Oh, and I'll probably call them a pack of ***** as well.

By comparison, Raedwald - the most articulate boat on the internet (and normally no slouch at invective) - comes over all lyrical on the subject:

When I think back on all the good things in my life - all those brief little scenarios of joy and pleasure, the warm laughter of friends, the passion of lovers, the sudden stunning realisations that you are gazing at a scene of true beauty, the closeness of companions who have shared past danger - always in the scene somewhere is alcohol. The old French vintner who declared "A day without wine is like a day without Sunshine" had it spot on.

Please go read the whole delightful thing. Then bookmark one of the best sites around; my blog of the week.

That we Blogpowerers have little in common is evident from the most cursory scan of our blogs. However, by undertaking regularly to read and comment on each others output, we have made a neighbourhood in the vastness of the blogosphere. Our self-selecting community  makes it all more manageable, more human. 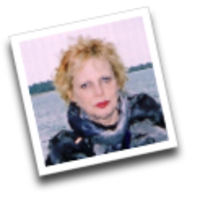 Without Blogpower, I would never have spent any time reading Welshcakes Limoncello's blog, Sicily Scene. To begin with, she's Welsh (as am I, partly). Having grown up in the Principality, I cannot even hear "Wales" or "Welsh" without also hearing "narrow-minded."  I had to leave as soon as I could, because village gossip, Socialist envy and "Chapel" judgementalism are just not my things. So I am sorry to say her nom de blog alone would have sent me running.

Then she's a teacher too. So is my wife who feels much the same about teachers, as a group, as I do about the Welsh. In both cases, many are nice enough people. In both, some are intelligent and interesting. One or two even dress well. But, life being short, there's simply no time for the hard work of sifting out the good ones. 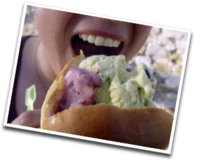 That's in her favour. But I am more into eating it than looking at pictures of it. Why a nation which still produces on average arguably the worst meals in Europe (don't talk to me about Gordon Ramsay, check out the motorway services) has such a thing about TV chef shows is beyond me. It's not a spectator sport, people!

Sicily, of course, is also in her favour. The place has dark glamour. Mention Wales, and I think of narrow minded teachers. Mention Sicily and I think of  Michael Corleone's wife, Apollonia, played by Simonetta Stefanelli who sadly died last year. I remember the line that "In Sicily, women are more dangerous than shotguns."

Having said all that, Blogpower brought me along and I am now hooked. I read every word Welshcakes writes and enjoy all her photographs of food, cruel though they can be for a native of one culinary desert, residing in another. In everything she writes her personality shines through, in all her teachery Welshness.

Despite my firm belief in the time-saving merits of a good prejudice, I have come to like her. The test of a good blogger, is that you never ask yourself why they do it. It's a bizarre notion, in principle, to put your thoughts out on the Internet for any passerby to shoot down in flames. Many bizarre people, in consequence, take to it. But a good blog can justify itself in many ways.

Some bloggers have political agendas. Some are in a kind of self-therapy and appeal immediately to others with the same issues. Yet others just have something so interesting to say that you are happy to let them, and even join in. Welshcakes is one of those, I think. If she betrayed her Welshness by leaving the Principality and condemning herself to a life of hiraeth*, she does so even more by being frivolous. The Welsh don't do frivolity, as a rule. She does it very well. She also writes well, which is less surprising from a countrywoman of Dylan Thomas. It has always pleased the Welsh part of me that a Swansea man wrote the best English of modern times. Welshcakes is not in that league, of course, but she turns a mean phrase.

Take a look at her blog and give it time. Settle into the rhythm and you will find yourself acquiring real insights into another way of life. Seeing Sicily through the eyes of a Welshy is quite an experience. Watching her blossom into a Siciliana, as through the everyday details she grows into the local way of thinking is fascinating. There is a Welsh saying "Gorau Cymru, Cymro oddi cartref" meaning, roughly, that the further you are from Wales, the more Welsh you become. I think Welshcakes may yet disprove that.

Stick it on your blogroll, paesan, and you won't regret it. One day she will be too Sicilian to blog, and then it will be too late.

*A Welsh word for how much more miserable than usual a Welshy feels when outside Wales.

Terry Watch, because he has a public mandate to be a moonbat

Link: Terry Watch, because he has a public mandate to be a moonbat.

If you have not yet discovered the comic phenomenon and anthropological curiosity that is Councillor Terry Kelly, then Terry Watch, my blog of the week, is the perfect introduction.

Bookmark it, subscribe to it, tattoo the URL on your forearm but do not miss out on your daily dose of pterrydactyl politics. Mind you, be warned. As the poor beast is tethered to the post of his crude intellect, baiting him like this is rather a cruel sport.

The UK Daily Pundit: Bring Out Your Dead

Link: The UK Daily Pundit: Bring Out Your Dead.

This made me laugh more than anything else in the last week.