Liberal democracy will be the biggest casualty of this pandemic

Liberal democracy will be the biggest casualty of this pandemic.

I tweeted several paragraphs from this excellent article before realising the way I used to do this was better and turned to my blog. The article lifted my spirits because Lord Sumption, pillar of the legal Establishment, is articulating all the concerns I had begun to fear marked me – not as a perfectly reasonable classical liberal – but some kind of sociopathic crank. That is after all, according to the opinion polls, what most Brits seem to think of those still speaking of Liberty in present circumstances.
Lord Sumption quotes Professor Neil Ferguson, who in speaking of the Sage Committee's reaction to China's response to the COVID-19 virus, cheerily remarked;

It’s a communist, one-party state, we said. We couldn’t get away with it in Europe, we thought. And then Italy did it. And we realised we could … If China had not done it, the year would have been very different.

With these words, Ferguson – whose botched, bodged and ballsed-up computer projections, none of which remotely matched the prophetic accuracy of a tabloid astrologer, were used to justify tyranny throughout the Western world – reveals himself as a monster. Not least because he evidently sees nothing sinister in them himself. I had feared since I first read them elsewhere that most fellow Brits would not be concerned by them. I had begun not just to fear that our liberties were in danger but that I had been deluded in believing we ever had them.
Lord Sumption addresses that in his article. My executive summary of the British Constitution is just two words long: "Parliament rules". Unlike our American cousins, we have no legal constraints on state power. The name of our "Supreme Court" is just lasting proof that Tony Blair is a poor lawyer. The Judicial Committee of the House of Lords (its name before Blair changed it) was less snappy but less deceptive.
Much of our history consisted of Parliament trying to constrain the power of the monarch and our constitution reflects that. Parliament succeeded, and since then – as our democracy is absolute – it has not been law but convention that kept Britons free. As Lord Sumption puts it:

What makes us a free society is that, although the state has vast powers, there are conventional limits on what it can do with them. The limits are conventional because they do not depend on our laws but on our attitudes. There are islands of human life which are our own, a personal space into which the state should not intrude without some altogether exceptional justification.

The craven, cowardly surrender of the heirs of John Hampden to state tyranny shows how fragile those attitudes were.
I don't subscribe to any COVID-19 conspiracy theory. This microscopic threat (all of which, I read somewhere, could be contained in a Coca-Cola can) is real. What is also real is the celebratory glee with which evil forces have used the fear of it to make us submit to power. The jaunty tone of Professor Ferguson's quote is blindingly revelatory of his attitude, and that of the Western Establishment as a whole. Boris Johnson would have us believe he's on the classically-liberal wing of the Conservative Party; a staunch defender of Liberty. Lord Sumption's comment on that is as searing as a mild-mannered Law Lord is ever likely to make;

The Prime Minister claims to believe in liberty and to find the current measures distasteful. Actions speak louder than words, and I am afraid that I do not believe him. He is too much of a populist to go against public sentiment. He lacks the moral and political stature to lead opinion rather than follow it.

Two evils are abroad in the world today – COVID-19 and a far older one; the lust for unconstrained power. One would fit easily in a Coke can. There's a real danger that the other may never be contained again.

At first I only used it to publish links to posts here. As the blogosphere faded and Twitter became the online forum of choice, I made the foolish error of being drawn in. Sadly (and more sadly not because of my participation) it has now become so influential that decisions on who may not use it are believed to influence elections in the great democracies of the West. Our legislators seem to care more what is said of them in this disorderly online bar-room than in the homes of their constituents. If MPs are not careful to the point of paranoia what they say there, they are in danger of being metaphorically hauled from their carriages by the cyber-mob.

Perhaps I am just nostalgic for more leisured discussions during the brief heyday of blogging? An unkind comment I once made back then about the "tabloid" style of fellow-bloggers seems naive now. Snappy as their writing was, they were Dickens compared to the ranters of Twitter. They were also delightfully tolerant of difference compared to the cyber-Stasi now howling for the suppression of all contrary thought.

I told a friend yesterday that I was a failure because no-one had even called for my Twitter account to be cancelled. This, despite my "inappropriate" views and my ethnic "original sin" ("white privilege" as its high priests call it). I just don't have enough readers for Emperor Jack's praetorian guard to fear me. My "wrong think" is too ponderous and polite for any single tweet to go viral from a base of a thousand followers.

A tweet is just the right length for a put-down or a sneer. At best it has room for a slogan. Few have the skill (I certainly don't) to attempt advocacy, diplomacy or that forgotten key skill of public discourse – persuasion – under its constraints. Even those geniuses of verbal economy who wrote the American Declaration of Independence or my blogging muse Thomas Paine (historically unrivalled in the political influence of his carefully-weighed words) could not have refined their best poetry into its nasty little haikus.

I have been trying to think what great Enlightenment wisdom could be expressed in a tweet. None of my choices are as powerful as the most successful (and destructive) "tweet" of all time;

How many lives have those few words destroyed? How much human progress has been prevented by its meretricious appeal to the untutored mind? At the age of 16 it had me in its whoreish clutches and I was lucky to escape. Young Jeremy Corbyn never did, poor soul. 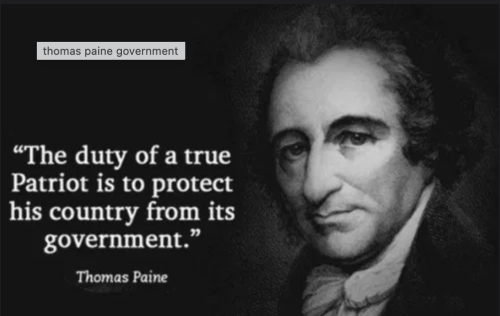 Old Tom, original and best, could have tweeted;

"Government, even in its best state, is but a necessary evil; in its worst state, an intolerable one."

He would never have wanted to pass on his thoughts in bite-sized form though. He would have hated not having the opportunity to place them in historical context, to develop his arguments and, vitally, to consider how they might be wrong. His friend Jefferson, a Welshman with our love of words, but blessed with more literary skill than morality, could have tweeted that;

"The tree of liberty must be refreshed from time to time with the blood of patriots and tyrants. it is its natural manure."

However the best historical "tweet" I can come up with is from Montesquieu;

Gentle readers, what would you suggest as history's greatest "tweet?"