In a dispiriting conversation with an old friend this week I was barraged with “official” information and accused of callous indifference. The social media ban on criticism of official messaging on the pandemic (even where it’s self-contradictory) is apparently redundant. The population is policing itself; sending to Coventry anyone who dissents. I’m beginning to feel like metaphorical Coventry is my home town.

If you try to research the issue on Google you will find yourself steered to the state’s agitprop (sorry “official information”). I distinctly recall reading an article reporting a study by medical researchers at Oxford University, which estimated that 63,000 life years will be lost in the UK to cancers undiagnosed/untreated because of the “save the NHS” focus on COVID 19. I remember the detail that twenty years of a young cancer patient’s life could be lost to a late diagnosis. I remember mentally contrasting that with the weeks or months of life of those most vulnerable to coronavirus that might be “saved” by lockdown. Or rather might have been saved if it had not been combined with sending infected old folk back to their care homes. I should have kept a link because that article has vanished into the search engine’s sinister, algorithmic “memory hole”.

The old-fashioned blogosphere comes into its own here (though weakened by search engine manipulation). This excellent post makes several important points, for example, and I suggest you add the blog in question to your regular RSS feed or bookmarks. Unless, of course, you’d prefer to take the blue pill and be happy in the carefully-crafted search engine matrix of мистификация (Russian for “mystification” or what we call disinformation)

If the criterion is severity of the pandemic or likelihood of death from the disease, this disease is not unprecedented at all — and not even within my own lifetime. In 1968-69 we had the so-called Hong Kong flu. Look up how many people died of it, and you will find a figure of “approximately” 100,000. They didn’t even try to keep exact track of the figure; but of course the seeming precision of today’s number is an illusion anyway. The 100,000 may sound like a lot fewer than the recent Covid-19 numbers, but remember that the U.S. population was much smaller — under 200 million, compared to today’s 331 million. Gross up the 100,000 figure for today’s larger population, and you would have had about 165,000 deaths, which is approximately the same as the worldometers site is reporting today as the number of U.S. deaths in the current pandemic. Then there was the so-called Asian flu of 1957-58. U.S. mortality for that one is given at about 70,000, but this time with a population of only 172 million. Grossed up for today’s population would give close to 140,000 deaths.

What was different about the Asian flu and Hong Kong flu pandemics was not the severity of the disease or likelihood of death, but that governments and bureaucrats had not taken on the arrogance of power to think that they could make the disease go away by scaring everybody out of their wits and locking down the economy and throwing millions of people out of work. We went about our lives as normal. People went to work. Children went to school. Social events and plays and concerts continued. Indeed, the Woodstock festival was in 1968, just as the Hong Kong flu epidemic was cranking up.

Our Western leaders put us all under house arrest. Our leaders in the 1960s never thought to stop their “flower children” going to Woodstock or the Isle of Wight. Consider how different our cultural history would have been if those “happenings” had been prevented. Quite apart from economic impoverishment and (for the most unfortunate among them) lost years of life, what Woodstocks has this generation lost? What moral right did our political leaders have to make these choices for them? What does it say about us that, not only did we allow it, but most of us ostracised or even demonised those who questioned?

Encouraged by David Bishop's comment (below) I went back to Google and managed to track down if not the article (behind the Daily Telegraph paywall) that I was remembering, then one very like it referring to similar research. More helpfully I found the article in The Lancet Oncology that it was referencing, along with this alarming chart (click to enlarge). The number of "life years" lost seems to be more than I remembered, when you add up all their careful calculating, cancer by cancer (the effects of delayed diagnosis vary). 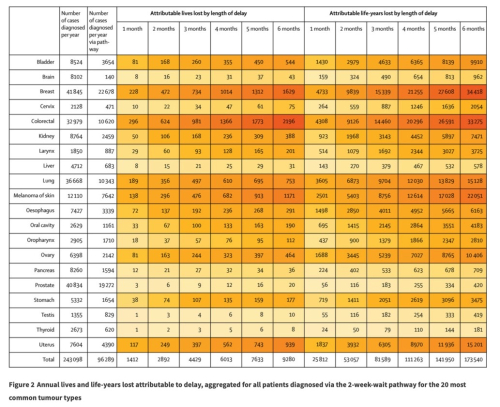 My "memory hole" point stands in that Google puts lots of approved data in your way when you are trying to find something specific. There are clearly algorithms that detect searches looking for such things as "lockdown causing cancer deaths" (which is what I searched for). Back at the beginning of this self-inflicted "crisis" I said I would not be surprised if measures to "fight" coronavirus caused more deaths than the virus itself. Given that these stats refer ONLY to cancer (and there will be lots of heart patients and others who failed to present for diagnosis because of the corona-panic) it's sadly beginning to look like I may have been right. I take no pleasure in that, but I do think heads should roll among the apparatchiki. With great power, as I believe someone's Uncle Ben once said, comes great responsibility. They must take responsibility for the way they abused the great powers we should never have granted them.

This tweet links to the actual article I was remembering. I mis-remembered 63,000 as 68,000 and have corrected that above.