Inflammatory speech? You ain’t seen nothing yet, mofos!

To call the Benn Act the “Surrender Act” is to incite violence against those who enacted it, according to Labour. The Act was designed (as its sponsors would tell you) to ensure the UK does not leave the EU without some variant of the “withdrawal agreement” previously “negotiated” by Mrs May and thrice rejected by this Zombie Parliament. That agreement was famously described by former Greek Finance Minister Yanis Varoufakis as;

”...a deal that a nation signs only after having been defeated at war”

So, if accurately describing an Act of Parliament is all it takes to provoke anger against you, perhaps that anger is righteous? If you are prepared to enact all sorts of radical policies on the basis of mere pluralities, but thwart the decision of an actual majority of the British People, then perhaps you have invited their wrath?

Neither the Conservative Party nor Labour has, since the War, ever secured a majority of the national vote. The Conservatives secured 55% in 1931.

Labour’s highest percentage post-war was 48% in 1951. The Conservatives’ highest share of the vote was 49.7% in 1955. Neither has achieved 52% post-war and no likely victory in the imminent General Election will give a popular mandate approaching that.

If the Liberal “Democrats” win a majority in Parliament and revoke the Article 50 notice, 40-something percent of the electorate will have thwarted 50-something percent. The anger then would be hard to contain and would be stoked to dangerous levels by the smug triumphalism of the Remain Ultras and the EU imperialists. You saw their sneering grins outside the Supreme Court this week. You saw Verhofstadt’s tweets. Imagine them if they win. 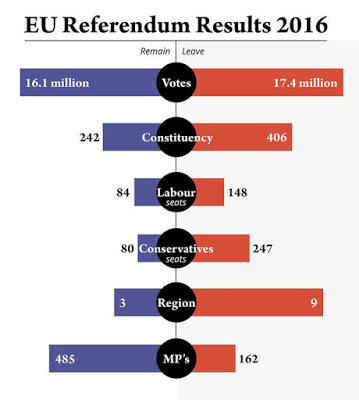 The Referendum was necessary precisely because the constitutional issue of EU membership cut across party lines. A big majority was secured for Remain in 1975 (including my very first vote) because the “Common Market” was seen as a benign liberalisation of international trade. Discontent was seething at the steady mutation of that Common Market into a proto-state. No government had ever asked the British People to approve that change. Most indications were that they wouldn’t have approved.

Leavers ranged from libertarians like me, through patriotic statists of right, left and centre to the hard left of the Labour Party and indeed the Communist Party. Reasons for leaving ranged from principled objections to an over mighty state to a desire to escape EU restrictions on “state aid” that prevented an even mightier state. That’s why, when Remainers ask “...but what do Brexiteers want?” we can’t answer with a political programme. Our only honest answer is “...whatever the future political direction of the UK might be — it should be decided by people we can sack if they annoy us.”

Boy oh boy, are the people in charge in both Westminster and Brussels annoying us now! We want an election to sack as many of them as we can. For so long as they deny us that, they are relying on our decency and good manners to sleep easily in the beds we have feathered so lavishly for them. They’d better hope we are more decent than them and have far better manners than they have exhibited in their sneering, supercilious and dismissive campaigns against us. And far better manners than Labour’s Shadow Chancellor. 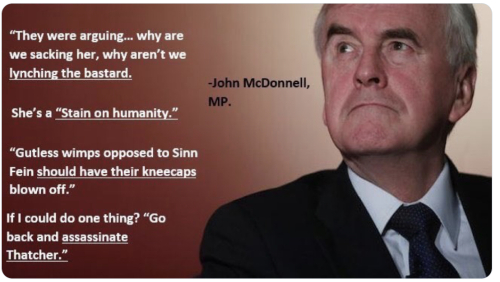 The violence of his discourse makes “humbug” seem rather gentle, no? But then it is always “one rule for us...” with them.

A fantastic day for democracy?

So says Anna Soubry, an MP for a party with literally zero support. Jeremy Corbyn, the opposition leader with the lowest approval rating since records began, agrees. On the back of the Supreme Court’s apolitical decision, would-be plutocrat Gina Miller smugly continues her well-funded political assault on the biggest democratic vote in the history of our nation. She does so flanked by the leaders of minority parties too “frit” to face an election. This is democracy Jim, but not as we know it.

The law is now clear. The PM erred. I am sure he will respect the decision. That legal judgement is one thing but the jubilant fake-democrats’ equally clear determination to use it to thwart our decision to leave the EU is another. Please don’t quote me that “no mandate for no deal” nonsense, by the way. No deal acceptable to Parliament is on offer and they are doing all they can — in active concert with the other side’s negotiators — to prevent the government achieving a better one.

They will accept nothing short of stopping Brexit. All else is lies, mystification and agitprop.

Several of them referred reverentially to the Supreme Court as the “highest court in the land” but that is a blatant lie. They are straining their every sinew to ensure that our highest court continues to be the European Court of Justice, that our highest political authority remains the EU Council of Ministers and that our government is the EU Commission. These self-proclaimed “democrats” are today celebrating the chance this decision gives them to fight for our judiciary, legislature and executive to remain on foreign soil unaccountable to the British people.

That’s not a fantastic day for democracy but it is a great day for fantasy democracy, fake democracy — for Britain remaining a colony of a foreign power. Because if your Supreme Court is in another country, that’s what you are — a colony. As Tony Benn warned decades ago and as Guy Verhofstadt recently confirmed to rather surprising wild applause at the LibDem Conference, the EU sees itself as an empire. The days of European imperialism are not over, it seems, until the failed imperial powers of the past have another go.

Unlike the Remain ultras, I can accept a decision I don’t like. The court’s ruling surprises me in light of the Bill of Rights but I am no constitutional law expert and I now accept our constitution is as they say. I have nothing to say against the judges concerned. I won’t reargue a case determined by the court I (unlike Anna Soubry et al.) believe should be the highest in the land.

It changes nothing as to the political and moral rights and wrongs of Brexit however.

Those calling for the PM’s resignation are hypocrites. He has offered to resign by calling an election. Knowing they would lose, these triumphant “democrats” refuse to let him do that. They don’t want to back him, but they refuse to sack him. Knowing a new Parliament would (if the Conservatives see sense and act in concert with the Brexit Party) be solidly for an immediate Brexit, they prefer to hold him in place and try to use him as their puppet.

The court’s decision is disappointing but the Millerite thugs’ hypocrisy, elitist disdain for the British people and cynical hostility to true democracy is drearily predictable and utterly infuriating to decent patriotic Brits. They are playing with fire and I hope only they get (metaphorically) burned.

It used to be obvious in England that a good person was a law-abiding one. I was brought up to see the police as my friends and my protectors. I hate that I don’t feel that way now.

There was no road to Damascus moment. I had no personal bad experience with a police officer. I don’t think the police (apart from some senior officers far closer to being politicians than coppers) are to blame.  Rather there has been a decades long Chinese water torture of political “reforms”. Some were driven by the cynical “identity politics” of the Western Left; designed to set brother against brother and sister against all brothers so as to create conflicts only greater state power can resolve. Others, like this one, were political stunts to play on our instincts to win votes.

We all agree that every human life is of equal value before the law. Right? Yet, shamefully, that’s no longer the view of the English Law in practice. To kill or injure a straight white male carries a lower sentence than to kill or injure someone whose protected status makes hurting them a “hate crime” for example. The law in effect now values members of certain ethnic groups, women, the members of one religion and non-heterosexuals more highly. Those who preach loudest for “equality” have long sought — cynically or stupidly — to undermine the only equality that matters; equality before the law.

Boris’s latest trick along these lines — “life means life” when sentencing those who kill infants — is cynical not stupid. We are programmed by nature to love and protect not only our own young but those of all humans. For many of us that spills over into an urge to protect any childlike creature; whether a vulnerable adult human or a non-vulnerable adult panda whose markings make its eyes look big (a psychological trigger because babies are born with adult size eyes). “Think of the children” is such a common political ploy precisely because one of our strongest instincts is to do so.

“Most people think all parties and the courts have lost the plot on sentencing. We agree with the public.”

So do I. But I also believe every human life is of equal value. Sentences should (all other things being equal) be equally severe no matter who the victim is. The government’s other recent stunt — more severe punishments for those who attack police — is from the same immoral playbook. They pick a group we favour; brave coppers, cute little children, and then signal their virtue by passing laws to “protect” them. Oppose such reforms, as I am doing here, and you bar yourself from public office. Congratulations. You’re too ethical to be a politician.

Don't oppose such reforms however and the criminal law gradually becomes a source of societal resentments and injustices. Since its purpose is assuage resentment and crush injustice, that’s a problem, no?