Of happiness and hope

I am in the middle of what seems to be a month long celebration of my 60th birthday. I am jollier than I would have expected, having eyed this approaching milestone with dread. Of course I SHOULD be jolly. I am a privileged Westerner, living a life he never dreamed with a loving family and affectionate friends. But I have political reasons too.

The fall of the Berlin Wall was the key political event of my life. Like most of us, I had never dared to hope Communism would fail in such a clear and comprehensive fashion. I moved to Eastern Europe in 1992 and, as a specialist lawyer, helped my real estate clients build on its ruins. The transformation we helped the people of the region achieve was spectacular. If we compare living standards in Poland when I moved there in 1992 with today only a fool or knave could deny the powerful virtues of capitalism. The transformation is greater than even an enthusiastic free marketeer like me would have predicted.

I lived in that optimistic environment for twenty years - never really understanding how naive Fukyama's analysis of "the end of history" had been. Back in the West, however, our Marxist academics regrouped. They began to focus even more on "cultural Marxism"; on fomenting other social conflicts to create a perceived need for a controlling elite at the helm of a powerful state. I firmly believe that such a state has always been their one true goal. It enables them to live high on the hog in the parasitical, hypocritical idleness that Marx himself achieved as he sponged off his naive bourgeois friend Engels, rogered his servant girl and bilked his creditors. All else has always been bullshit. 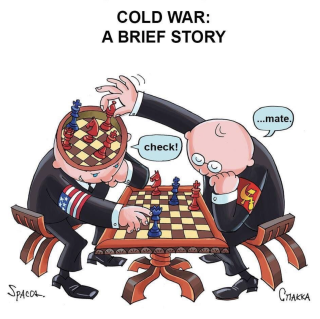 I gradually realised that the true outcome of the Cold War might be as this cartoon cleverly presents it. Out of that dark realisation this blog was born. Essentially a solution-oriented, problem-solving, optimistic person, I told myself it was better to light a candle than curse the darkness and spent a serious chunk of my life arguing whenever I could against our fifth columnists in academia. In the last year, the academic Berlin Wall has begun to crumble too. I wish I could claim that we had won the political argument but I think something far more fundamental is going on. There is a shift as profound as when the Labour Party replaced the Liberal Party in mainstream British politics and King Edward VII told his mother that "we are all socialists now".

I suspect the Left's first real strategic error was its bizarre embrace of Islam. You don't need a degree in politics to notice that Muslims are socially-conservative, anti-feminist to the point of misogyny and - in the cultural Marxist jargon - "homophobic". Leftists in academia, contemptuously ignorant of religion, seemed to view them as just more poor immigrants to vote reliably for the continual expansion of the state. They arrogantly bent their own logic to welcome a clearly anti-progressive force into their ranks. The error might not have been obvious in their ivory towers, but it was pretty clear on the streets of Luton and Bradford. The credibility of leftist academics began to crumble.

Other errors too numerous to mention followed as the academic bubble drifted further from reality. Most decent, practical people could not be bothered (who has the time if you have actual work to do?) to contest their ideas, but the perception grew that - however many black friends you had - you were going to be called racist. That however much you loved your mum and treated your lady friends with respect, you were sexist. That however little you gave a damn about what your homosexual friends and colleagues got up to in private that you were homophobic. And that pointing out the threat Muslim immigrants presented to Western values made you islamophobic. It became clear that the names you were called were just part of an academic game. They had nothing to do with truth.

As the fifth column's influence intruded even into popular culture, people who lived in the real Coronation Streets and Albert Squares noticed that their on-screen equivalents were becoming preachy purveyors of condescending agitprop. I had long stopped watching the BBC's news and current affairs output because I could not stand the primary school teacher tone it adopted. The same tone was now to be found from Emmerdale to Gallifrey.

Just when I thought we were all going to drown in cultural Marxist condescension however, the dam broke. Despite being told precisely what to think by an united elite singing the same, well-rehearsed tune and utterly confident of success, the British people found their voice. On the day of the Brexit referendum they raised their traditional battle cry of "bollocks to the lot of you!" Even better than that moment has been the torrent of condescension that has followed, laying bare the contempt in which our would-be masters hold us. Cheated of the cushy "jobs" and lavish funding for policy-based evidence making "research" the EU had provided, they could not conceal their impotent rage. It has been delicious.

As has the aftermath of the election of President Trump in the USA where similar forces are at play. I have concerns about the current POTUS's grasp of economics and wouldn't like him hanging around my daughters (but ditto JFK and Bill Clinton and we all survived them). Trump is no libertarian and is politically as far from me as Clinton. However he seems strong on the defence of the West and - even better - has made noises about defunding academia. If he achieves the latter he may, for all his vulgarity, prove to be the King Jan III Sobieski of our day.

Even more encouragingly, just as when I was at university in the Seventies, the key voices in public discourse are not now from the Left. Rather they are such delightful people as the dangerous faggot, Milo Yiannopoulos, the factual feminist Christina Hoff Sommers and my current favourite, the softly spoken Canadian Professor Jordan Peterson. The ever more authoritarian attempts to suppress dissent in academia have put feminist icon Germaine Greer on the "no platform" list and made apparent to even a casual observer how dangerously far political correctness has gone and just how sneeringly arrogant and condescendingly  authoritarian its proponents are.

So I am politically happy not because anyone I approve of holds political office anywhere, but because I have hope for the future. The ideologues who failed in their overt parasitism in Eastern Europe and China are failing in their covert version in the West and for the same reason. Their ideas conflict with reality.

The chess game in the cartoon is not over yet. I shall be following the next moves with gleeful anticipation.

I am tired of OpEds in the MSM and social media posts from my left-leaning friends accusing current politicians of causing "social division".

The divisions in Western society didn't spring up magically at the bidding of President Trump, the Brexiteers or Marine Le Pen. They were patiently forged over decades by Democrats in America, Labourites in Britain and Socialists in France. They and their Cultural Marxist cohorts in academia have delighted in setting class against class, race against race, gender against gender, sexual orientations against each other and one religion against the rest.

They have encouraged and exploited envy and hatred. They have sown the wind for their political gain and now they are reaping the whirlwind. May their demise be as swift as it is just and let's hope they don't cause too much more damage as they are ejected from the political scene.

Then, when these hate-mongers are finally gone, we can work to build societies in which, as every citizen is of equal moral and legal worth, we can focus on what unites us and get on with living our lives in peace.