The Scouring of the Shire

I am striking a better balance now between online and offline. Having taken a blogging break after my Great American Tour, I have returned to a slimmed-down daily diet of blogs old and new, but am restricting consumption to once a day. This, and a serious attempt to get back to regular sleeping habits has helped a lot. I now find I am reading "real" books with pleasure again, without straining to concentrate.

I re-read The Lord of the Rings over the weekend. It's the only novel I have ever returned to more than twice and I long ago lost count of how many times I have re-read it. An index of my success in retraining my concentration is that I found myself looking up a "new" word that I have clearly read umpteen times without noticing; "thrawn". It's a useful one too; very applicable to our modern rulers.

The book seems to have fallen out of favour with the current generation. The Misses Paine cordially dislike it. Nor was their view changed by Peter Jackson's films. They tolerated the first one, but found The Two Towers tedious. I love it myself but acknowledge they have a point. Jackson clearly got carried away with the powers granted him by CGI; manouevering more armies than Tolkien ever did - and marching legions of photogenic elves that never featured in the original.

I read each book and watched each film in turn and noticed all the ways in which Jackson strayed - sometimes justifiably and sometimes not - from his text. For example "The Scouring of the Shire" is one of my favourite chapters of the book but he omits it from the film; his hobbits return to a Shire unaffected by the great events of the story.

In Tolkien's version, of course, the Shire had been much affected. I had forgotten just how out of step with current political "thought" (if mindless conventionalism can be dignified as such) Tolkien's account is. Perhaps one reason why modern social democrats (as most Brits now are) do not take to Tolkien's masterpiece is his account of the practical effects of "Sarumanism" on the hobbits' homeland.

'Taking in folk off-hand like, and eating extra food, and all that,' said Hob.

'What's the matter with the place?' said Merry. 'Has it been a bad year, or what? I thought it had been a fine summer and harvest.'

'Well no, the year's been good enough,' said Hob. 'We grows a lot of food, but we don't rightly know what becomes of it. It's all these "gatherers" and "sharers", I reckon, going around counting and measuring and taking off to storage. They do more gathering than sharing, and we never see most of the stuff again.'

Or how about the career of a "Shirriff" (hobbit policeman) under the new regime?

'We're the First Eastfarthing Troop now. There's hundreds of Shirriffs all told, and they want more, with all these new rules. Most of them are in it against their will, but not all. Even in the Shire there are some as like minding other folk's business and talking big. And there's worse than that: there's a few as does spy-work for the Chief and his Men.'

It strikes me that this chapter of The Lord of the Rings gives as good an account as could be hoped for in modern literature of what it would be like to roll back a social-democratic state. In the story, most hobbits welcome the return of their old freedoms and are happy to be released from the burden of snooping, spying and busybodying. But of course their "gathering/sharing" regime has been in place less than a year. It would be a far more difficult task in the England on which the Shire was so clearly based.

Can readers suggest other passages in modern literature that are as clearly anti-statist?

Kill me. Just kill me now. 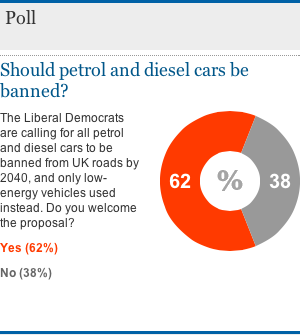 Or alternatively, head over to The Guardian's "Comment is Free" section to vote for sanity in the face of this madness.

Having recently attended the Goodwood Festival of Speed and having heard reports from relatives who visited CarFest last weekend - not to mention the popularity of Top Gear with everyone worthy of the name of Briton - I don't think the LibDems could be more out of sync than this. They clearly hanker for the irresponsible joys of political oblivion.

Here's a fact for the benefit of any politicians who like winning elections. We love our cars. We love them far more than we love you. You will have to prise our steering wheels from our cold, dead hands.

I began by being annoyed by this latest assault on liberty and civilisation, but I am actually quite delighted on reflection. Sadly I cannot trust my fellow citizens to rise in defence of habeas corpus, but this is quite another matter. Keep it up, Guardianisti.

America’s Urban Distress: Why the Public Pension Problem Is Worse than You Think | Zero Hedge.

The linked article is typical of two things. Firstly why I had to smile when, on my recent tour of their country, American Conservatives told me their country was turning "socialist." And secondly why that's unlikely ever to happen. 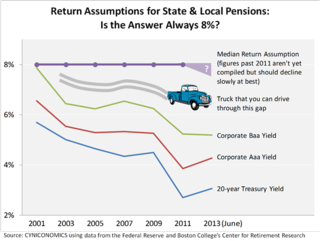 As I understand it, the equivalent shortfall in the UK is near-total. There are no pension funds for most state employees (though the teachers do have one - massively underfunded, of course). No money has been invested to provide for the future pensions of most state employees, any more than it has for future state pensions for the rest of us. It's a pure Ponzi scheme. As Nye Bevan said in a rare burst of humour and honesty;

Yes, America's pubic authorities have under-funded their employees' pensions, but ours have not funded them at all. They have simply expected from the outset to take the necessary money by force from future taxpayers. After all, what honest return in investment could possibly compete with the infinite return on money taken by violence at merely administrative cost? Our rulers have disregarded the Jeffersonian wisdom that has restrained American public spending for most of its history;

I place economy among the first and most important of republican virtues, and public debt as the greatest of the dangers to be feared.

Hence the last Labour government's panic-stricken importation of millions of immigrants to make up for the declining birth-rate of the underpaid and over-taxed locals who have economised in the face of rising overt taxation and the relentless covert taxation of inflation by cutting back on the size of their familes. Hence also, perhaps, the oddly perverse incentives to breed - regardless of ability to pay for the resulting childrens' upbringing. A Ponzi scheme backed by violent force can last longer than a private sector version, of course, but it can still be brought down prematurely by demographics.


So why does the story suggest it's unlikely that socialism will ever arrive in the US of A? Because of the writer's delightfully thoughtless assumption that future obligations should be funded. Of course there are economic idiots everywhere (and dishonest self-serving rascals too) but there are fewer people in the US prepared to dispute Adam Smith's truism that;

America's free speech is constitutionally entrenched - as witness the delightful puzzlement of American tech companies such as Google and Twitter when European authoritarians demand they censor their services. The media (particularly local media) routinely use their freedom to challenge particular line items of public spending, even if lax in holding politicians to account for the overall ballooning of the American state and its various extortions.


Again, their failings pall into insignificance compared to ours. Here, a multi-billion pound hole in the Ministry of Defence's budget didn't even pass the Alistair Campbell "crisis management" test of remaining in the headlines for more than ten days. The public sector incompetents who lost billions down the backs of their ministry's sofas faced - as far as we know - no consequences at all. This, though whole cities of taxpayers will have to work for years to meet the shortfall.


I am optimistic enough to believe that America's good sense will one day benefit us too. The statist tide is turning there, as was clear from my conversations with many people on my tour. In recent press reports I have even read the words "libertarian populism" - a phrase as unexpected and delightful to me as was "the fall of communism" two decades ago. If the state can be scaled down in the United States and the resulting economic benefits compared and contrasted with the moribundity elsewhere, that will arm lovers of freedom everywhere.

I was asked at a business conference shortly after my return to the UK what had changed most during my twenty years away. I answered that the police now seem more interested in what you say than what you do. The room fell silent as people took in the full import of this dangerous speech and the subject was hastily changed. No-one seemed to see the irony in that.


No real crime committed against me in the UK has ever been solved (I have been burgled repeatedly and have had the occasional item stolen from my office and hotel rooms). The police simply issued crime numbers for my insurers and showed no interest at all in catching the criminals. Indeed when I found the stolen goods from my first burglary in a local second hand shop and reported it, the police took the fence's word over mine; believing him when he said he had bought the items before the burglary occurred.


I spent two years of my life working as a manual labourer on construction sites in my youth and the rude, robust and sweary banter (suspended immediately as a matter of courtesy whenever women or children passed by) was a fun part of the job. I am saddened that I now live in a strange place where an employer is expected to pay £27,000 to a man, not even because he was called a rude name, but because he heard his colleague called one. What feeble creatures British workers are. What tender, girlish sensibilities they now have.


France can invade any time it wants. The tactics in the video would now reduce English defenders to quivering, offended wrecks clinging tearfully to the apron strings of Mother State.

In order to be "good" we must be making a choice - a choice based upon logical, higher-order thought as opposed to instinctive reaction/habit/lower level heuristic thought. Most of the time, we do not make choices - we act from habit, we react in accordance to the rules of lower-level thought. It is often difficult to make a choice.

People respond to incentives. Actions which are a response to physical incentives cannot themselves be considered good. The incentive for a good action must come from elsewhere. It is therefore not possible for us to force people to be good directly - but it is possible for us to use force to compel the lower order mind into creating the conditions in which thought and goodness are possible/easier.

For while responding to physical incentives is not good, it does not follow that we should constantly fight our lower level mind. It is not necessary for us all to be ascetics. Further, without certain social and physical conditions, thought itself is impossible.

So violence can make us good in the sense that; our actions are not totally (or even largely) based on rationality, that the conditions surrounding us affect our ability to be rational, that the conditions surrounding us are largely determined by other people and that unthinking people can be affected by both positive and negative (violent) incentives.