Doctors out of their boxes

I am not quite sure how I missed the linked article back in September but I am glad I found it via Chris Snowdon's review of the year at his excellent blog, Velvet Glove, Iron Fist. The authoritarians of the medical establishment are in many ways our best hope for liberty. This may seem paradoxical, but bear with me.

The greater the State becomes, the more authoritarians it attracts. Wormtongue types are drawn, as so many of them already have been, by the chance to subvert legitimate authority to their own ends while living on the state's plunder. The more they succeed, the more arrogant they become. They see no legitimate boundaries to their control of their fellow men. Our corrupt political class will offer no defence against these parasites unless and until popular resistance threatens their own power. We cannot count on their principles, if indeed they have any. We can rely entirely, however, on their self-interest.

Where, however, is this resistance to come from? State education, state broadcasting and the generally emasculating effect of the Welfare State have much weakened the yeoman spirit that made England, for most of its history, delightfully ungovernable. The unthinking majority of voters will never rebel - until it's far too late - against threats to freedom of thought. Attacks on their lifestyle however are another matter. Cromwell fell not because the Monarchy won a rematch of its debate with republicanism, but because, having weakened his appeal by forbidding dancing, aleing and Christmas, his hypocrisy in having his son succeed him (just like a King) tipped the scales of popular feeling.

The state can beat up as many anti-statist intellectuals as it likes and no-one will protest. Let it beat up the smokers, drinkers and pie-fans however and popular resistance can be expected - even from those usually too idle to move further than to the nearest Greggs. Doctors with God complexes may therefore be our best hope. Perhaps as we enter the final phase of end-of-year excess, we should be campaigning for votes to be proportionate to BMI, units of alcohol per week or fags per day?

Please tell me the Left is right...

LISTEN: Jobless Man Who Won't Get Up At 8am | LBC

...in condemning this caller to LBC radio as a Tory plant. That would be far less depressing than it being real as it would suggest there is some guttering flame of entrepreneurship, initiative and political killer instinct in what I had written off as the work shy, policy-thieving ranks of the Blair-imitating "Conservatives."

The difference between communism and socialism 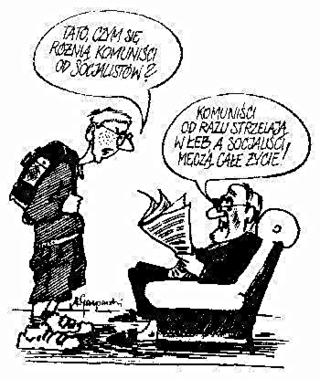 As I lived in Poland for eleven years, I sometimes get stuff like this from my friends there. The son asks his father the difference between Communists and Socialists. The father replies "Communists shoot you in the head immediately; Socialists torment you your whole life."

Hard-earned wisdom from a country that knows.

The redemptive power of labour

What I Learned in the Poverty War by Peter Cove, City Journal Autumn 2012

The linked article is one of the most encouraging I have read for a while. It describes the experience of a former member of the "welfare industrial complex" (the author's splendid coinage) who founded a private company to profit from finding work for the dole-dependent. His work influenced Rudy Guiliani as Mayor of New York who is quoted as saying, sagely;

Please read the whole thing. It's worth it to note how welfarists in the USA opposing his plans sound just like Polly screeching madly against IDS's reforms. Leftists everywhere despise interference with their self-satisfied schemes to exploit the poor.

“Pure fallacy from beginning to end” at Catallaxy Files.

In this video, Milton Friedman deals with the left's eternal favourite, the broken window fallacy. When I was a student politician, there was a Trot called Andy on the NUS executive. After every conference motion, he screwed up the papers and threw them on the ground exclaiming "more jobs!" His stupidity was rather funny then, but when it dominates economic thinking it's less amusing.


Money is a token. It has no intrinsic value. It's only useful as a means of exchanging goods and services. The measure of our wealth is the quantity of goods and services available to be exchanged and therefore our ability to produce them. Money should, if properly managed, track the value of that wealth, but that doesn't mean it's the same thing - as witness the fact that making more of it simply reduces its purchasing power.


Government jobs are overhead. Almost every business has to have some overhead, but business people understand that it must be kept to the necessary minimum. All libertarians ask is that voters understand that at a national level as well as they do in their everyday dealings.

What chance to our children have of hearing these arguments?

American state school teachers may, for all I know, be as consistently left-wing as ours. One needs no conspiracy theory to account for it. People who choose careers financed by force either have no scruples about it when they sign up, or soon learn all the excuses necessary to live with a clear conscience. Such careers are simply not attractive to those of an independent spirit - though many such are to be found teaching in private schools.

It's heartening however that - because so much of it is independently-financed - American higher education (though hardly pure) still has enough diversity to allow the linked exchange between an economics professor and an 11th grader.

Can anyone imagine such correspondence with a pupil in a British state school?

Even the prospect of power corrupts

How No 10 warned off the Telegraph - Telegraph

So there's no threat to freedom of the press, eh? If even the "good guys" who claim to be worried about Leveson's recommendations reach for them as a weapon when threatened with exposure of alleged expenses fraud, imagine how the enthusiasts for state control will use any new powers they win.

These are entirely useless idiots - unless you are a politician

Britain could end these tax scams by hitting the big four | Polly Toynbee | Comment is free | The Guardian. 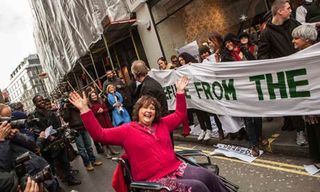 Ignore Polly. She's just writing her usual hypocritical twaddle. Read the comments. They would be hilarious if they did not so clearly reveal the depths of ignorance, prejudice and hate-addled envy that now characterise most of the British people.


Any reference to tax structuring by Socialists (Margaret Hodge or the Guardian Media Group, say) is dismissed as Tory Propaganda while they rant on about taxing turnover, FFS.


Do they even know what turnover is? Do they understand it's perfectly possible (and indeed quite common at present) to suffer losses on substantial turnover? They either don't or more likely they don't care.


The sad fact is that they just hate (a) the productive and (b) the rule of law. They want their leaders to be able to grab any damn thing they want from anyone they dislike regardless of whether their victims obey they law or not. Due process of law is not the keystone of civilisation to them; it's a loathed obstacle to visiting their mindless hatred on their enemies. It's all (as they keep saying amusingly in demonstrating their entire ignorance of life's complexities) "very simple"


The companies they are attacking and others like them do all the innovating that makes our lives better (who really wants to live now without Amazon or Kindle?) and pay the wages taxed (directly and indirectly) to pay for all the "social goods" these retards lust over. I read recently that entrepreneurs take only about 3% of the value they deliver as their own reward. Their customers get 97%. Compare and contrast with the massive losses on "fiscal churn" involved in delivery of social goods by the retards' beloved state.


Corporate taxes are a joke anyway. The true economic cost falls on individuals (customers, employees and shareholders in varied combinations). There is no point at all in corporate taxation except to disguise the true level of personal taxation. These idiots are being taken for a ride by politicians, as usual. I predict, not a riot, but further punishment and demonisation of the productive in order to win votes from the envious, hate-ridden, feckless readers of that Cayman Island-based model of fiscal rectitude; The Guardian.

Gay marriage or economic Armageddon: which do you think matters more? – Telegraph Blogs.

Mr Delingpole has a point, but I am surprised he is surprised. Isn't fiddling while the city burns the classical recreation for political arsonists? One of the best practical arguments for libertarianism is that, given fewer things to take care of, politicians could take better care of them. Gay marriage would not be an issue for a libertarian state as it would not concern itself with ANY forms of marriage. After all, can any arrangement more properly be described as private?