Here is another test for the Slightly Less Left coalition to fail. Are teachers free to have and to express non-Left political views or not? If it is true that Ms Birbalshingh has been forced to resign, then the Minister of Education should intervene - and right vigorously.

Today, teachers who privately question the socialist orthodoxy of British state education must be feeling afraid. If this government has any cojones at all, then tomorrow it is the orthodox socialists who have cheated ordinary children of education and destroyed social mobility in Britain who will fear for their jobs. In the linked post Archbishop Cranmer calls for the dismissal of "Dr" Bishop, the "Executive Headmaster" of Ms Birbalsingh's school. I can only agree.

PS: Prodicus is on their case too. If you have a blog, I hope you will join in.

Cancer in the wild

An Englishman's Castle: Cancer in the wild.

I do admire the way the Englishman thinks, not to mention the economy with which he expresses himself. I do not admire those English academics who reach distressing conclusions that one intelligent farmer plus Google can refute so quickly and so deftly.

The coalition's most important test

Much can be learned from the way in which Vikram Dodd, crime correspondent of the Guardian, explains the concept of "control orders;"

"...Nine British citizens or residents are currently subject to the orders which severely restrict the freedoms of those believed to be involved in planning violence, but against whom no case can be brought which meets the criminal standard of proof..."

The use of the passive voice is always a warning sign. "Believed to be involved", by whom exactly? Not by a judge or jury but by the Home Secretary, on the basis of secret evidence she will allow no court to test. Indeed, if a victim of such an order succeeds in having a court overturn it, the Home Secretary can simply issue another. Double jeopardy does not apply.

If there is "no case to be brought that meets the criminal standard of proof", then (if innocent until proven guilty) nine innocent people are detained in our country. This is no legal nicety. The burden of proof should always be on those who would imprison you. That is at the heart of the values "counter-terrorism" is supposed to defend. To detain someone without due process of law is - quite simply - wrong. No political career should long survive support for such an outrageous idea. Yet Mr Dodd's anonymous source in the intelligence services suggests politicians can't survive not supporting it;

"...The review was conceived at a more benign time, but now there is the threat of a Mumbai-style attack, and the increased threat from Irish terrorism. Do ministers want to take that risk? The power is used sparingly. It is about a very small number of dangerous people..."

"Dangerous?" So he says but is unwilling to prove. The Guardian (forgetting, as usual, that its very name is a reference to Juvenal's question "quis custodiet ipsos custodes?") tells us that "security services and police have so far won their argument that there is no alternative to control orders." How can that be so when the "alternative" existed for centuries in Britain and still exists in most other countries?

We have a choice and, as a society, we are choosing wrongly. If you doubt that, consider the company (modern and historical) we are keeping in making the choice we have.

I shall miss Anna Raccoon. She was a good un. I hope she will be happy out there in the real world. But I also wish she would fix all the links to her by putting her deceased blog back up...

This is a respectable family blog, but... 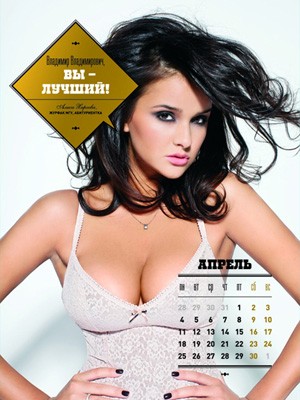 Those of you who have been reading about the Moscow University journalism students' birthday tribute to Vladimir Vladimirovich Putin may be curious to see the calendar concerned (link above). While I do miss Russia a lot, you can imagine that it's not for the quality of the journalism there. That these young ladies are already sucking up to the ruling elite so early in their journalistic careers gives little hope for improvement.

I suspect the late, valiant Anna Politkovskaya, would not turn as much in her grave as puritanical anglo-saxon readers might imagine. Still, I can't imagine she would be impressed by the sycophantic messages adorning the photos.

Why I don't take advertising

Actually, I have turned down the very occasional offers of advertising here because I can't be bothered to complicate my tax return for the trivial sums involved. However, I also felt that to make money from my blog might somehow compromise the opinions expressed.

The decision of Nominet's domain name tribunal to transfer the rights in ihateryanair.com to the airline itself turned upon the fact that the previous owner had made a few hundred pounds from advertising. Ryanair argued that he had used their brand to promote his "business" and the tribunal found against him. Had he taken no advertising, he would have been spared the trouble of moving his site to its new location (link above).

Contrary to the ignorant and intemperate opinions expressed by Andrew Marr recently, bloggers are mostly doing our (more or less) valuable bit to contribute to public debate and civil society in general. Of course, I don't blame anyone for making a few bob from blogging. You will never read here that business is a bad thing. It is the life blood of our society and ultimately funds every "superior" activity of which socialists and other sneering snobs approve. This case suggests, however, that bloggers need to take care when mixing their opinions with commerce. How fortunate for the Rupert Murdochs of this world that the same doesn't apply to old media!

Forget politics for a while. This is the best news ever. Google has developed a way to get all those tedious people who don't like driving off the road. Or at least into the passenger seat where they belong. I have long thought that driving is only a suitable activity for people who truly love it. Those who say that it's "just a matter of getting from A to B" don't get it and should never be allowed to block the path of those of us for whom it is a liberating, life-affirming activity.

When most cars on the road are driven by Google algorithms, will the rest of us be able to add something to our Google account (for a modest fee) that will make them respond to a flash of our headlights by moving back into the losers' lane to let us pass? Or if that doesn't appeal, just imagine being able to take a taxi without having the driver give you a distilled version of this morning's Daily Mail and Sun editorials.

Oh but wait; how will journalists find out what "the little people" think (or MI6 discover weapons of mass destruction in potential invasion targets) without taxi drivers? Perhaps Google can build in that functionality?

The wrath of His Grace Archbishop Cranmer is as hot as his departure from this life. And rightly so. The Labour Party Conference consists of little else but one Marxist teacher after another expressing extreme political views about education. That, it seems, is fine. Yet if one ex-Marxist convert to Conservatism expresses contrary views, she is suspended and publicly rebuked by her head teacher. It is wrong. Indeed it is so wrong that the head teacher in question should be dismissed for political abuse of her position as a public servant. It is time that the leftist establishment in Britain realised that its views are just that. Not gospel truth beyond all challenge, but political opinion open to contest.

On almost the same topic, a question. Does anyone remember as much attention being paid after Blair's historic (and catastrophic) victory in 1997 to the Leader of HM Opposition's choice of Shadow Cabinet members? The BBC seems to operate under the impression that the Labour Opposition is a government in exile - kings over the water waiting for usurpers to fall. Odd Ed's political antics to put his true enemies (in his own party) in their place are of little current relevance to the nation. If he had immediate plans to return to power, he would hardly have chosen a barely-numerate ex-postman to be the Shadow Chancellor, would he?

Literacy on the streets of Vancouver

The message is correct and polite. There are no childish symbols, because you are assumed to be literate. In this case, there is an easy expectation that you know what an "expansion joint" is. I get simple pleasure from North American signage. I do wonder why the sign is so temporary, when the expansion joint is so permanent though. 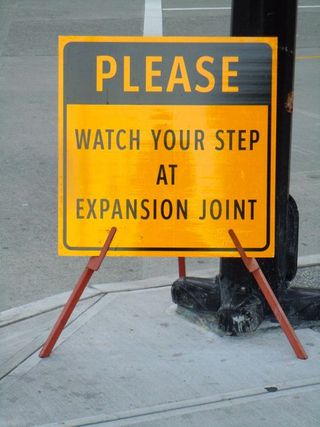 I didn't take a photograph but another Canadian sign I saw was rather amusing. Over the urinals at the Vancouver Convention Center are stickers warning (in polite, good English and - thank goodness - again without illustrations) that the water used to flush them is recycled and unfit for drinking. Hmm.

Beggars in Canada are also polite and articulate. As I had a pocket full of coins that would only otherwise rattle around in a drawer for years I handed them to a chap who asked gently for the price of a coffee. His thanks were brief, sincere and accompanied by best wishes to me and my family.

Thanks to British Airways (an airline I have told my secretary never to book me on when there is a reasonable alternative) I have an extra few hours in Vancouver. Had I known, I could have gone for a walk, rather than wasting time in the departure lounge. I can already feel British mediocrity reaching out to me across the width of one continent and one ocean. How sad.

You know how to whistle, don't you? 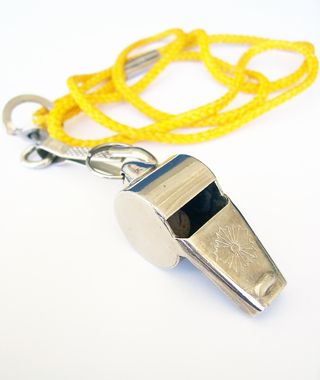 I don't know who these people are or anything about their motivations, but they seem to have the germ of a good idea, which they describe as;

a website that offers a 'one stop shop' for political information, advocacy and debate
My only worry is that, in signing up, the closest option to define my political interests was "equality and civil liberties". What on earth have those two things to do with each other? I suspect bias, but let's give them a chance...