BBC NEWS | UK | UK Politics | MP warned over electronic readout.
Had the Deputy Speaker been in his post at a different point in history, presumably he would have objected to an MP reading out a letter not written on parchment?

Should expatriate Britons continue to be second class citizens?

Iain Dale's Diary: Should Ex Pats & Overseas Territories Have Their Own MPs?

What a small-minded spirit sometimes lurks behind Iain Dale's engaging smile. My blood warmed mildly at his remark;

...if UK expats were genuinely worried about their democratic rights, they'd vote in far larger numbers than they do. Only 12,800 are even registered to vote....

Other nation's expatriates (or any citizens who happen to be abroad on polling day) can walk into their embassy anywhere in the world, identify themselves and vote. British expats however, must re-register in their last UK constituency (a place, in my case, with which I have no ongoing connection); apply separately for a postal vote, and then appoint a trusted proxy to whom the ballot is (possibly) sent in time. This must be done each time you want to vote. Organised and politically-passionate as I am, even I didn't always succeed.

I have been abroad so long now that I have lost my vote completely. This, though still working for and remitting profits to a British business to be taxed. This, though still paying council tax on a UK property. This though still paying VAT, car tax, petrol duty etc on all purchases there. This, worst of all, though my family will still get to pay almost half of my lifetime's savings in Inheritance Tax to be squandered by the UK government when I die.

As to whether I am, as Iain sneeringly suggests, not;

"....genuinely worried about my democratic rights..."

...readers of this blog may well judge for themselves. If his remark was annoying, however, it was as nothing to those in the comments. As Kipling's mother said;

What do they know of England, who only England know?

Not a lot, if Iain's readers are anything to go by. By the time I caught up with the post, there were over 40 mostly blood-heating comments. Probably no-one will scroll down far enough to read mine, but if you can be bothered, please do so and take part in the "debate".

Expatriates come in many varieties. Those in the EU get to vote locally, which is something. Those outside are ultimately disenfranchised completely. Many contribute massively to Britain's economy, especially those of us who produce those "invisible exports" that so often prop up the UK's GDP. To read Iain's commenters, you would never guess.

The debate in the comments is horrifying. Not all expats are tax exiles. Those of us with homes and other assets in the UK pay a lot of taxes and we are liable to inheritance tax. Even those who **are** tax exiles are not using any of the benefits taxes pay for and are serving those back home by keeping some competitive pressure on the government to keep tax down. When did tax - essentially a legalised protection racket - become a moral issue, for God's sake?

I work overseas for a UK business and have been instrumental in remitting millions to that business, all taxed and taxed again. That your commenters think an unproductive parasite living in Britain is worthier of a vote than a British citizen who is an agent of economic growth and a generator of valuable "invisible exports" is appalling.

I think the fact my hobby is writing a blog on British politics suggests I am rather more connected than many Kipling was thinking of when he wrote "What do they know of England, who only England know?"

As for your comment that expats don't bother to vote, have you ever tried? It's a nightmare. Postal votes are not allowed to leave the islands and you need to appoint a proxy you can trust. Even a politically-interested person like me failed to get it organised several times. Other nations' expats just go to a polling station in their embassy. Not us. Then, after you have been abroad too long, you lose your vote altogether (even though the Revenue still plans to steal almost half your life's work from your family when you die).

Why I love Americans 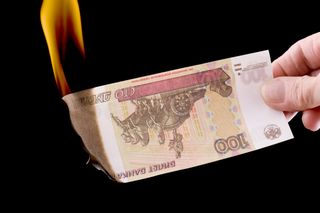 I hosted a "thank you and farewell" dinner in Moscow last night for three gentlemen who were my first major clients here. They are experienced Russia hands and were reminiscing about the petty restrictions of old.

In those days, if you couldn't produce the currency exchange receipts on exit, the customs officer would smilingly "confiscate" any unspent roubles. An American to whom this happened, on having the rules explained to him, apologised and said that of course he would not take his roubles out of the country if that was against the law. Then he took out his cigarette lighter and set fire to them. His travelling companions saw what he was doing and passed their roubles to him to be burned. Then they smilingly set off to board their plane.

That's the spirit a Welfare State kills, and the world would be a worse place without it.

Everyone's quote of the day

The Heresiarch has hit the nail on the head perfectly in the linked post, highlighting the government's mendacious approach to science (and supporting it with quotes from an academic whose research was disregarded in favour of "data" from pressure groups);

We've seen this process in campaigns to tackle binge drinking or obesity (aka "the obesity epidemic"), in demographic predictions and assessments of terrorist threats, in education policy, in foreign policy - in fact, there can be few areas of government policy untainted by the selective use of statistics and tendentious research. The government has loudly proclaimed its commitment to "evidence-based policy-making" while instead pursuing policy-based evidence making. In the short run, this has produced some extremely bad legislation. In the longer term, it risks destroying public faith in any evidence put forward by the government. Even when their figures are accurate no-one will believe them.

If Scientologists commit fraud, then let those individuals be convicted and punished. If that discredits a particularly loopy religion (in a hotly-contested field) then so be it. To ban the religion itself, however, would be a mistake. Religion thrives on oppression. When I first moved to Poland, church attendance was incredibly high. Throughout the Communist era, the church was the only public voice of opposition. Poles credited Pope John Paul II (with the help of Ronald Reagan and Margaret Thatcher) with the fall of Communism. By the time I left, 11 years later, attendances were falling to "normal" levels and (though Polish national identity is closely tied up with Catholicism) educated young people were becoming as anti-clerical as other modern Europeans.

Scientology itself is no more a "fraud" than Catholicism. Indeed, by comparison to the immensely wealthy Catholic Church, Scientology is a raw beginner at the delicate art of parting the credulous from their cash. If there is no God, then asking believers for money to support the infrastructure of any church and to keep the priesthood in parasitic existence on the gullible is "fraud". I mention Catholicism in particular both because this story is about France and because it is a church with a long record of strong opposition to competitors. Banning an heretical sect is quite mild by Catholicism's historical standards.

When believers in old religions mock followers of the new ones, they remind me of smokers and drinkers decrying more modern drugs. Cigarettes and booze are the same thing; they are simply hallowed by age and convention. The first followers of Jesus of Nazareth, the Buddha and the Prophet Mohammed were probably regarded with just as much derision as those of L. Ron Hubbard today. Viewed dispassionately, the tenets of the old faiths are no more plausible - and certainly no more verifiable - than Scientology's ludicrous, lucrative tales of space aliens.

Indeed, it seems to be a feature, not a bug, of religions to test "faith" (i.e. the ability to believe without proof) with crazy stories. Having crossed the desert with a caravan of camels, and experienced the hallucinations typically brought on by thirst, starvation and heat, Lawrence of Arabia observed it was no coincidence that the Middle East was where so many religions were founded. Mr Hubbard may have raised the bar on the faith test, but not much.

Ban one religion and, logically, you should ban all. Ironically, since any religion requires that all others be seen as fraud, you would have the support of most religious people if you did it one by one. There would be no point however. If neither the Inquisition nor the KGB could suppress one or all modes of religious belief, then no milder force is likely to succeed. Religious believers simply see repression as yet another test of their faith.

People are entitled to believe, and to persuade others to believe, what they wish. They are entitled to solicit donations or charge fees for religious rites, just as others are entitled to refuse with a laugh or a curse. In the end, the problem with accusing entire religions of "fraud" is that, while some followers may know (or suspect) they are living a lie, most don't. While the cynical may say that all victims of fraud are betrayed by their desire to believe something too good to be true (consider Socialists, for example) it's important that the "victims" here are willing. They could, if we are honest, easily be any of us.

France is making a mistake about Scientology. Her politicians and courts are in danger of accidentally playing the part of Pontius Pilate in converting a cult into a religion. No church that has Tom Cruise and John Travolta as respected "Elders" should be taken so seriously. It is below the dignity of the
nation of Voltaire and Diderot to do so.