Time will tell if she is history, Norm

I like reading Normblog. Norman Geras may always be wrong on any subject but cricket (and quite often on that), but he writes well. His blog is a place where I can keep up to date with the thinking of my opponents, without the usual strain on my aesthetic sense. In the linked post (comments disabled over there, so I must do it remotely) he expresses more elegantly than most the Establishment's view of the Governor of Alaska.

It reminded me of a conversation about the Presidential Elections this week with a prominent American businessman whose privacy I must respect. I took the opportunity of lunching with him in a professional context to fish for his views on the likely outcome. To be honest, based on current polls I was worried about a bet I have made on McCain/Palin (based on the assumption that, as Gordon "Jonah" Brown favours him, Senator Obama is doomed).

In the course of an interesting chat, I asked if John McCain's selection of Sarah Palin as his running mate had been madness or genius. Without hesitation he answered "genius." He explained that in the America foreigners don't know, she is going down famously and drawing bigger crowds than Senator Obama. You would never guess that from the MSM, but he assured me it was true. He was confident she is winning support for her ticket every day.  He also sadly predicted that the Bradley Effect would come into play on voting day. We both hoped he was wrong about that. Though we both wanted Senator Obama to lose, we didn't want him to lose that way.

Foreign intellectuals don't often get to meet ordinary Americans and wouldn't like them if they did. Hence their condescending amusement at McCain/Palin's "Joe the Plumber" shtick. Each of those much mocked-Joes and Janes (among whom I would personally far rather live than with Guardianistas like Norm) has a vote however. Only time will now tell how they are going to cast them.

It would be presumptious of me to predict the outcome. Fascinating though I find it, I profess no expertise in US politics. My charming and thoughtful new friend, however, told me not to give up on my money just yet.

Britain's recession will be longer and deeper, because Britons are more indebted. They won't be purchasing goods or services above or beyond the essentials, because they now have to pay back the debts incurred during what I think of as "the Vorderman binge". Businesses will go bankrupt for lack of customers. Everyone who remortgaged their house to pay for consumer goods or holidays (directly, or by refinancing debts incurred to pay for such stuff) is responsible for the situation, as is the government which has been doing the same thing, but on a galactic scale. Those of us who didn't, however, seem set to pay for it. Such is democracy.

Economists at the Swiss investment bank UBS forecast yesterday that Britain would suffer the deepest recession of any major economy, with its economy contracting by 1.4% next year, as the effects of the financial crisis are compounded by a "collapsing" housing market. They also predicted recession in the eurozone and the United States.

Of course, everyone is keen to blame the bankers. That's like blaming the holiday company or the car dealer for selling you the car or holiday you couldn't afford for the money you couldn't afford to borrow. Did they put a gun to your head? Did the Chinese government put a gun to Gordon Brown's head to force him to borrow? Were they supposed to say no to save you and him from foolishness? They are convenient scapegoats.

Of course, as long as it's officially their fault, the government can justify ripping off  the prudent few to subsidise even further the imprudent many. When will people face up to the basic fact that their actions have consequences? For those forced to sell their pension funds for an annuity right now, those consequences are very severe. How they must wish they had lived unproductive lives as state drones, so that they could have an unfunded final salary pension to be paid for by taxpayers as yet unborn.

If you are employees of the British State, you may kill and neither be brought to trial nor named. Everyone else accused of a crime must endure the publicity until acquitted at trial. Before those who cannot distinguish between an accusation and a proven fact rant in the comments, let me say that - if Mr Al Fayed is guilty - he will deserve all he gets.

The important word in that sentence (as every educated person in Britain used to understand) is "if".

Centuries of British freedoms being 'broken'

Essentially I started this blog to light my candle in the encroaching darkness of the British "security state." Under cover of 9/11, our government has been transforming our society in completely unacceptable ways. Follow the link to read the views of the outgoing Director of Public Prosecutions. You will see he agrees with me. That he should have spoken out so frankly is alarming. I fear it may be because he knows that his successor has been selected as someone more likely to cooperate. I hope I am wrong.

Outgoing Director of Public Prosecutions Sir Ken Macdonald warned that the expansion of technology by the state into everyday life could create a world future generations “can’t bear”.

I can't bear the prospect of it. Every sign of its arrival hurts. The only difference between me and most of my fellow citizens is that they don't seem to have the imagination to see what's coming. Here's hoping Sir Ken's observations reach a few more of them.

What a brilliant idea!

Link: UK Libertarian Party: They Are Not Listening - Time for Action.

The UK Libertarian Party is organising for each MP to receive a copy of 1984 by George Orwell on November 5th. Click on the link above to learn all about it. Many sponsors will be delivering their copy to their MP in person. At least one will be dressed, "V for Vendetta" style as Guy Fawkes. As a long-standing expatriate, I have now lost my vote in Britain and have no MP. Nor could I be in London that day. But if you follow the instructions at the LPUK website you could volunteer to buy a copy and deliver/send it to your MP. Go on! You know you want to.

Link: FT.com / Home UK / UK - Last-ditch effort to save a column from Armageddon. 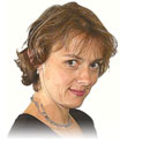 I noticed years ago that every time I read an article about something I knew, it was wrong. I am not sure why it took so long to realise that all the other articles were wrong too. By definition, journalists are experts in nothing but journalism.

Some are sensible however. Some are witty. Lucy Kellaway's writing in the FT, for example, is a regular source of delight. She has a delicate way of skewering pretensions with no apparent malice. In the linked column, she writes about the current spate of linguistic inflation. I linked to it without logging on to my FT.com account, so you should be able to read it too;

"This is the worst column I've written since 1929.

In scenes not seen in living memory, last Thursday in a late night session, I hammered out the fiendishly complicated details of this article in a last-ditch effort to inject some sense into the system. At 8.05pm, the lights were on in my first floor study and, anticipating a long and tense night ahead, I put in an order to the local curry house for a balti. When the foil wrappers had been cleared and with the clock ticking, I started feverishly drafting sentences about the changed landscape that we are in, the most toxic since the Great Depression. Ashen-faced and reeling, at 1.40am I rose. How would the package go down with shell-shocked readers? Would they roar their approval? Or would their confidence plummet in the worst collapse since the 1930s? Only time would tell."

Do click through and read the whole thing. She lays into the ludicrous comparisons with 1929.

"Irving Kahn, now 102, was last week interviewed on the BBC World Service and crisply said that today "things are a great deal better. People are spoiled". The main villains, he said, were the journalists - "the reporters who want to get attention writing up headlines saying how bad it is".

Bloggers are often unkind about MSM journalists. Sometimes with good cause. Their profession certainly has its full quota of rogues, charlatans and fools. Yet while it may be true that the best bloggers are better to read than the best journalists, it's beyond doubt that the worst of us is worse than the worst MSM hack. We should occasionally acknowledge that not only is journalism our meat and drink, but that sometimes it tastes pretty good. If Lucy Kellaway's column were a restaurant, it would rate three macarons.

Old Holborn is going for a walk

Old Holborn is going for a walk on November 5th. If I were in London that day, I would join him. If you are going to be there, perhaps you would like to?

Britain a dangerous place to do business?

Link: Britain a dangerous place to do business, OECD to warn - Telegraph.

See how the mighty have fallen. As a lawyer doing business in emerging markets, some of which are less than favourably rated by Transparency International, I sometimes have to ask local business people to sign provisions in contracts, which they find offensive, such as (when acting for companies with American shareholders) those relating to the USA's Foreign Corrupt Practices Act. They are (I think, understandably) upset by the implication of moral superiority on the part of their Western business partners. If our companies are to make any money in the next few years, they will need to do so in emerging markets. The cynical among you might think that a lax approach to corruption is the way to help them. On the contrary, governments need to live up to their rhetoric or damn their business people to charges of hypocrisy.

This humiliating rebuke by the OECD is as big a milestone on the path of Britain's decline as was the 1976 IMF crisis. And it doesn't even reflect the fact that our government recently used anti-terrorist legislation to seize foreign assets (the wrong ones, as it happens, such are the incompetents who staff our state). That fact alone is likely to cause a flight of capital from a country long dependent on foreign direct investment. A reputation for fostering corruption won't help. Neither will bringing into government former EU officials who like to hang out with foreign oligarchs on their yachts.

Link: Pensioner ordered to stop mowing grass because it's too tidy - Telegraph.

"We apologise if he feels the letter he received from us is heavy-handed. We are happy to meet Mr Hubbard to discuss the issue."

Not, you note, "we apologise for the heavy-handed letter." The clear - and very disrespectful - implication is that Mr Hubbard's feelings are irrational. Nor is this atypical. Consider this blog post for example. Why should any citizen be spoken to as the blogger's professional referees were here by a civil servant who was neither very civil nor much inclined to serve?

Given the behaviour teachers in state schools have long been forced to tolerate, it is no surprise that their pupils carry on their arrogant, foul-mouthed disrespectful ways when they find their way into public employment. Private employers have competitors and must find ways to modify such behaviours or lose their customers. The state has no such need.

My business plan for the next five years