These are the saddest words I have read this week and should disqualify the young actress who uttered them from a place at any serious University.

"I feel it's terribly important to continue with my education," she said. "In case acting doesn't work out for me."

Education is not (pace our idiot government) the same as vocational training. Education is an absolute, life-enhancing, good. It's not possible to have too much of it at any level you are capable of benefiting from. Even died-in-the-wool capitalists like me don't put a monetary value on it (though we do on vocational training).

Apparently, as well as being pretty enough to have been rumoured to be "the new face of Chanel" (since denied), Miss Watson is also bright.

"Despite filming for nine months of the year Miss Watson managed to get four A grades in her AS Levels in 2006 and has said she wants to read English and philosophy at Cambridge University."

If she applies to a serious university the admissions tutors are entitled to expect a thirst for knowledge, not a desire for an "insurance policy" in case showbiz doesn't work out. If she is lucky enough to get a place at Cambridge, it would stand her in good stead even if she never has to do an honest day's work again. How sad, by the way, that she obviously doesn't think education would help her be a better actress. I hope that is not a commentary on the splendid actors she has worked with.

One of my partners retired a couple of years ago after a successful (and lucrative) career in law. He had qualified by the old-fashioned "long apprenticeship" route and had no university degree. I was delighted for him that he won a place to study PPP at Oxford in his retirement. Presumably, as he wasn't going to need it for a career, Miss Watson would think him a waste of the space he occupies? I beg to differ.

"The noble Lord would say that, wouldn’t he?"

Link: Mr Eugenides: "The noble Lord would say that, wouldn’t he?".

If it is true that the holders of EU pensions

"... can lose them if they fail to uphold the EU’s interests or bring the EU into disrepute"

the interesting question is "why?" What on Earth goes on in the EU that it needs to put its pensioners under such pressure? Can you imagine any other body rendering former employees destitute because they drew attention to its defects or errors? I wonder if this intriguing fact is in any way connected to the EU's  auditors having been unable to sign off its accounts for 12 years?

Another interesting question is how you could "bring into disrepute" an organisation with the democratic values of Ghengis Khan and the morals of Madame de Pompadour.

A YouGov survey, conducted for Open Europe this week, shows that 14 per cent thought the Government should ratify the Lisbon Treaty. Indeed, only 29% of British people even want to stay in the European Union. So what does "our" Parliament do....? 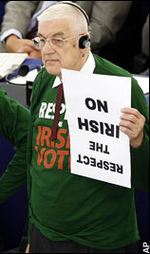 On a lighter note an Irish MEP reminds us of the happy innocence of our youth, when Irish jokes were still permitted and Dave Allen was the funniest man on television.

"Wordle" is a web toy by Jonathan Feinberg, which turns any text into a strangely beautiful word cloud. Here is a recent post of mine wordled (click to see it full size at the wordle site)

I am happy to have been invited to post at the 4 David Davis 4 Freedom blog. The linked article is my first contribution.

This seems a sensible political choice to me. He won't be doing this or this or this, will he?

It is a pleasure to welcome to the soon to be ex-Member for Haltemprice & Howden to the libertarian blogosphere. Something tells me we shall be hearing a lot from him.

Another point of view

Thanks to Jams for drawing my attention to this story. Maybe it won't be this particular technology (though it sounds promising) but I am confident that some technology or other will eventually prove to be the answer to our energy problems. The idea of a bacterium that eats waste and excretes crude oil is just wonderful, isn't it? The only thing that could delight me more would be a bacterium which ate Al Gore with the same result. As it seems to be a modification of E. Coli, that's actually not far from being possible. More humanely, it could live in his gut and he could excrete crude oil, which would allow him to make his first positive contribution to the welfare of mankind.

Either way, if it proves to be commercially viable, how much would you love to be the person who explains to the oil sheiks that their days of wine and roses are over and that it's time to reacquaint themselves with traditional skills?