Following on from my post yesterday, Tim Worstall posts about a Times article reporting that conviction rates for rape are higher than for murder. The figures bandied about by politicians and "activists" are the percentage of accusations leading to conviction, not the percentage of cases brought to court which end in a guilty verdict!

There is a real danger of a politically correct witch hunt here. You do NOT show your concern for victims of rape by demanding that innocent people are convicted to meet an artificial target. This is gesture politics at its worst and - as usual - all three political parties are guilty of it.

For whom do we vote if we want to live freely under just law? 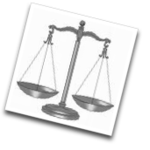 On my reading list before my first year studying law was a great little book called Straight and Crooked Thinking by Robert Thouless. It did me more good than any other book I read at that time. I may have to buy a copy for every journalist at the Guardian as a Christmas present. Just look at all the loaded language in the linked report.

"Reform" itself is a loaded word, suggesting that a bad law is about to be made better. Given that we haven't seen the draft yet, that's a little premature. "Unveiling" suggests that what it about to be revealed is appealing. The dance of the seven veils by Hazel Blears would not, after all, draw much of an audience.

Briefing juries on the "psychological effects of rape" is only relevant if a rape has actually been committed. That is - lest we forget - what the jury is there to decide.

Consider also the use of the word "improve" in the context of the conviction rate. Would a 100% conviction rate be perfect? Only if every allegation of rape were true and if every accused had been correctly identified. It is true that conviction rates are higher in some other countries than in the UK. It is also true, however, that there are fewer accusations of rapes in those countries. Perhaps people there make the accusation, or prosecutions are brought, only when there is a good chance of a conviction? Perhaps the legal protection of those making the accusation in Britain, and the societal pressure on police and prosecutors to take unsupported allegations seriously, has led to the rise in reporting of rape, rather than any increase in the crime itself? If this is true, then the conviction rate may as easily be too high as too low.

Rape is an horrific crime. It is also a terrible crime of which to be accused. The only "perfect" conviction rate is 100% of those who are guilty, which is - sadly - very difficult to achieve. Rape is always a problematical crime, not least because the chances of it being witnessed are low. The common sense of ordinary men and women on a jury is far more likely to help here than the lobbying of pressure groups. If I were falsely accused of rape, I would be much happier for my fate to be decided by a jury which had not first been schooled to believe that my accuser's evidence was intrinsically superior, or fitted a particular psychological profile.

In any crime, it is dangerous to focus on the conviction rate. It is crooked thinking indeed to see a higher conviction rate as "success." It is particularly dangerous to do so when, as in Britain, the courts protect the identities of those who make false accusations. The only sensible way to go in rape cases is surely to protect the identities of both accuser and accused until after the case is decided and all appeals exhausted?

I am delighted to say that there is now a TypePad "web app" for the iPhone that allows me to post to the Last Ditch on the move. This is my first such posting.

So not a "low level administrative error" then?

What will voters make of the fact that the Government sought to make a scapegoat of an innocent junior employee? British voters may not care about civil liberties, cronyism or even corruption, but I suspect this will offend their sense of decency. 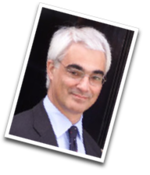 The always-amusing Daily Mash finds the humour in what is currently outraging the naive across the British blogosphere. To me, the incompetence of the State is a "given." As most of my fellow-citizens seem inclined to surrender their (and my) independence to it, the incompetence of the British State is actually my only hope of one day living a free life in my own country. If you lived next door to a monster with unbridled power, wouldn't you be glad if it was short-sighted, forgetful and stupid?

The only surprising thing about this story is that anyone is surprised. Go smell the stairs in a public housing block. Go look under the bed in an NHS hospital. That which belongs to the State, belongs to no-one. Hertz or Avis will tell you just how much people care about anything that doesn't belong to them.

An Englishman's Castle: Pig-Hoo-o-o-o-ey! As Lord Emsworth would say.

Link: An Englishman's Castle: Pig-Hoo-o-o-o-ey! As Lord Emsworth would say..

The Englishman speaks for England:

As I lean over the gate watching my Gloucester Old Spots fighting and squealing over the last apple in the swill trough my mind sometimes is drawn to Westminster....

I am offended. I have been racially and sexually insulted. The person who said this police mascot is "too white" is a racist scumbag. How "white" would be acceptable to you, my friend? I am white and I am proud. Of course, I wouldn't dream of offending other ethnic groups by complaining that the new mascot under development is, say, "too Asian" or "too black," but I damn well I demand the same respect in return. I did not choose my ethnic origin. It is quite wrong to attack me for it. By saying that a mascot of the same colour skin as me is unacceptable, that is what this person has done and I am furious.

Offended as I am, I may need to consider filing a complaint with the Equality & Human Rights Commission. On the other hand, given how gravely offended I am, perhaps a more aggressive approach is in order? My wrath is righteous.

In complaining that "PCSO Steve" is too male, our friend has grievously offended me again. How would it be if I objected to a girl mascot on the basis that she was "too female?"  Precisely how male could I be and remain "acceptable" to this sexist pig?

To look on the bright side, at least when Metropolitan Police officers are criticising people for being too white or too male, they are not shooting white males dead for resembling Ethiopians.

I have two guaranteed ways to provoke hostile comments here. I can mention Jean Charles de Menezes or I can mention that I am a lawyer.

Many feel aggrieved that the legal profession in Britain has not done more to resist the present government's sustained assault on our liberties. That is not entirely fair. The Law Society has submitted, on behalf of the solicitors' profession, briefing papers in advance of many illiberal pieces of legislation. Such papers can be found at the Society's website. It is not the profession's fault that most Members of Parliament are more interested in advancing their careers than in protecting the interests of their constituents. Certainly, thanks to the Law Society, no MP voted for any of this trashy "cry wolf" legislation without having the chance to know exactly what he was doing.

The Blair era of the Labour regime was dominated by his chums from the "senior branch" of Britain's legal profession (the ones with the funny wigs and the quaint attitudes). I am not aware what steps the Bar Council took to save us from the worst of New Labour's legislative follies. Perhaps they too were briefing assiduously but were ignored by our Poodle Parliament. I hope so.

Apart from some gallant efforts by the Judicial Committee of the House of Lords (our highest court, staffed by judges who embarked on their careers while the present Prime Minister was still in nappies) it sometimes seems that the third branch of the legal profession (the judges) has not been doing its bit. With so little constitutional traction, perhaps it is not surprising they have been steadily pushed backwards.

Whatever I may say here as to the efforts of our legal professions, I have to admit that they have failed in the face of an enormously illiberal peacetime government. The writ of habeas corpus -arguably the English Law's greatest contribution to liberty - no longer runs in the land of its birth. Notwithstanding the profession's efforts at public advocacy, our political parties are engaged in a macho contest as to who can gamble more liberties for "public safety".

So it is good to be able unequivocally to praise some lawyers somewhere. In Pakistan,  lawyers have in recent weeks and months stood up to General Musharaff, Pakistan's dictator, as no other group has dared. Many of them are paying the price. The Law Society recently reported to solicitors in England & Wales that one in four of all lawyers in Pakistan are under arrest, including the Chief Justice. It has launched an online petition which will be presented to our Prime Minister on November 23rd. I fear Gordon Brown is little more sympathetic to civil liberties than the General himself. Nonetheless, I would encourage any lawyers reading this to sign up here.

As the Economist reports in the linked article;

In Lahore, Karachi, Peshawar and Multan ...crowds of up to 2,000 lawyers have rallied against General Musharraf's coup. Wearing black suits and sleek moustaches and chanting nicely-worded slogans (“Dictatorship? Not acceptable!”), they are the general's main opponents...

With baton charges, and a whiff of tear-gas, the police are trying to quash the dissent. Hundreds of lawyers have been thrashed in the streets.

Some of my readers, including some I count as friends, will thrill a little at the thought of lawyers "thrashed in the streets." If these Pakistani lawyers stand up to the State for their clients as fiercely as they are doing it for their Constitution, I can only say that they are worth their fees.


General Musharraf calls this a state of emergency: a constitutional provision that allows for the suspension of some rights. Experts disagree. “The constitution does not provide for its own extinction. This is martial law,” said Salman Raja, one of Pakistan's finest constitutional lawyers, educated at Cambridge and Harvard—and detained in Model Town police station, Lahore.

Accustom yourself, dear readers, to the strange thought that there are lawyers worthy of your respect.

Guy Fawkes' blog of parliamentary plots, rumours and conspiracy: £24,000,000,000 of Public Money is a Matter of Public Interest

Link: Guy Fawkes' blog of parliamentary plots, rumours and conspiracy: £24,000,000,000 of Public Money is a Matter of Public Interest.

Guido is right. This is a matter of public interest. To keep the summary of the Northern Rock investment memorandum now in circulation on the internet "out there" despite the Government's efforts, here is a copy.

And here is a a quote:

By the end of 2010, the amount of replacement Bank of England funding drawn down by
WholeCo is expected to be £5.9bn.

That's your money, folks. Or it was.

I struggled with my connection, but managed to be present at the Second Life Cenotaph for the two minute silence this morning. FreeJersey Writer (Free Jersey Blog) and Bag Writer ("Bag's Rants") were also there.

The SL build of the Cenotaph is impressive and stands alone on a poppy shaped island. I was touched that so many people in SL (where British members are relatively few) chose to attend. As Second Life is based on Linden Labs' servers in California, the whole virtual world runs on Pacific Time. 1100 UK time was therefore night time in SL and the atmosphere was suitably sombre. 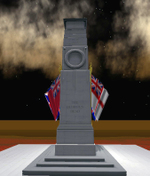 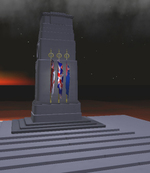