CF Diary: Martine Martin: How to make a "Tory Girl" from scratch

Link: CF Diary: Martine Martin: How to make a "Tory Girl" from scratch.

Martine Martin's experience of education turned her from Labour to Conservative. I found her CF article quite touching. It reminded me of my own counter-educational experiences at the hands of the Labour Party, which I have blogged about ad nauseam.

I didn't win an assisted place. None was on offer then. My local authority was red to the core and an early-adopter of the comprehensive fallacy. I struggled at a bog standard comp, as did my wife. We didn't go to the Universities we should have, but we still found our "way out." We were lucky. Perhaps we were tougher than most. Perhaps it was because we met so young and supported each other in the face of anti-educational "peer pressure." As I said; lucky.

My conscience still troubles me about the many young people from my background who, just like Martine's siblings, don't get the life chances they deserve. Tony Blair's conscience won't be troubling him, because that utter fake never met any such young people at his school.

The Guardianistas have a nerve to claim a monopoly on social conscience. The Labour Party, and its despicable middle-class fellow-travellers in particular, have done more harm to the life chances of working class kids than anyone.

Martine is working on a research project into "conservative-ish political blogs". If you have one of those, head on over to her site and volunteer to answer her questionnaire. This is a young woman who has earned the right to our support and encouragement. 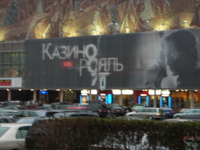 Casino Royale, playing today at a cinema on Novy Arbat in Moscow. What would Rosa Klebb think?

Do we have an Opposition?

EU Referendum has the courage to ask a question which could scarcely be more rhetorical. Meanwhile, Iain Dale lamely encourages our underequipped and otherwise neglected troops to do Dave Cameron's job, while a New Labour stool pigeon commenting anonymously in response to Iain's post stimulates a cathartic torrent of rage by asking what the Tories suggest should be cut to spend more on the army.

Much as I sympathise with the Brigadier's annoyance, I have to say he was foolish to accept a caution. He now has a criminal record for carrying an offensive weapon. If caught in such a situation, you should insist on being charged or released and have - if charged - your day in court. And you should also insist, as this over-confident retired officer did not, on having your solicitor present for your interview.

By the way, his fingerprints and DNA are now permanently stored by the police.

From this story about legal action to contest the ban, I have belatedly discovered that my old student union, among others, has banned the University's 77 year old Christian Union from meeting on its premises and deprived it of funding as an affiliated society. The Islamic Society, need I really add, continues to be both funded and affiliated.

Ironically, the concept of homosexuality as sin is common to both religions. Presumably, Birmingham University Guild of Students has not put the Islamic Society to the same "lesbian, gay and trans-gender" recusancy test it applied to the Christian Union? Interestingly, several other Christian Societies remain affiliated and funded. How come? Did the Newman Catholic Society change its constitution and/or submit to the test? I think the Pope should be told. The Pagan Society is also affiliated.

I would like to think this was extremist student nonsense, but that's what I thought thirty years ago when Leftists at the Birmingham University Guild of Students first put forward the policy of "no platform for racists and fascists." That anti-free speech stance is now the official policy of B.U.G.S. It is effectively also the policy of the British nation, as evidenced by laws on "hate speech" and the current legal, political and press onslaught on the BNP - an odious, but lawful, political party whose views I despise, but whose right to express them I would defend to the death.

First the Labour Party denied us the right to free speech, criminalising what we say. Then, by penalising "hate crimes" more severely than others, they made clear that some lives are more valuable than others. Then they claimed ownership of our bodies. Their ID Card legislation entitles them to assault us intimately to take our "biometric data."

Their intellectuals speculate as to whether an old person might have a duty to die to relieve younger family members of the "burden" they have become (making it easier to pay mortgages and taxes). Now, with dark and inexorable logic, they impose on doctors a duty - a legal obligation - to kill by withdrawing medical care.

Did they ever grant such "rights" or impose such "duties" without later broadening them? How long before those families with mortgages and taxes to pay have the "right" to demand that doctors kill their stricken relatives? How long after that before hospital managements can order death by way of "rational allocation of resources?"

Doctors, let's not deny it, have sometimes taken the decision - in consultation with patients and family - to withdraw life support. That was a matter for their consciences. But now those consciences have been nationalised, expropriated, brought under State control.

Today, Labour sets out to harden the consciences of doctors. Soon enough, when those consiences are sufficiently calloused, they will turn them into executioners.

Could anything make more clear the moral abyss into which the Labour Party has fallen? Ultimately, the abstract love of ones fellow man which some Socialists feel (and others pretend to feel for electoral advantage) is not merely a lesser version of love; it is its antithesis.

Rowdy families could be kicked out of their homes

Link: Telegraph | News | Rowdy families could be kicked out of their homes .

John Reid's approach to property rights does not seem to have changed much since his days as an overt Communist. Had Britain a written constitution, it would almost certainly protect the right to private property and prevent anyone from being deprived of the use of theirs without due process of law. That's pretty much a constitutional norm in a free society. Yet Reid is proposing summary powers to exclude people from their own homes for anti-social conduct.

Nightmare neighbours are no joke, but neither are they a new problem. The law offers remedies, including the tort of nuisance. Local authorities already have extensive powers. Fines of up to £20,000 can be levied.

Pointless "initiatives" designed to please illiberal voters with no understanding of the consequences are very much the New Labour modus operandi. The endless quest for legal novelty, however, has led Reid and his colleagues off the map of civilisation. They have led us into the uncharted territories marked only "Here be dragons".

Congratulations! You may now take your place as a subject of Her Majesty.

"And did those feet
In ancient times,
Walk upon England's mountains green?
And was the holy Lamb of God
In England's pleasant pastures seen?"

Well, no, but it's a cracking good tune.

How English are you?
Create a Quiz

I am a little worried about the missing 3%. I guess it's my Welsh ancestry showing through.

This post is well-researched, well-written and scary. We should all be concerned at the rise in popularity of the BNP. When all conventional parties are "triangulating" each others' marginal voters, this may be how those they take for granted strike back. I grew up in the Labour Northern heartlands. I have family and friends there. Richard is right in his assessment of how traditional Labour voters feel. They see Labour as the party of "anyone but us". They are not far wrong.

I don't believe for a second that most Brits have any sympathy with the BNP's general political stance. However, if they campaign for an end to Muslim immigration and for dealing roughly with Muslim extremists, they can achieve huge success.

Labour's terrorism scare-mongering may be designed to justify (a) its foreign policy and (b) its assault on our freedoms, but it is also generating hatred and distrust. With its weak policies on immigration and pathetic incompetence in expelling those denied political asylum, it is wide open to attack by the BNP.

Gordon Brown would do well to shut up about the recent acquittal of the BNP's leaders. His every word on the subject is just confirming the darkest suspicions of his "core" voters.

This is fascinating stuff. Read it while you still can. According to the author, "On Thursday, Margaret Beckett, the Foreign Secretary, compared climate sceptics to advocates of Islamic terror. Neither, she said, should have access to the media."

If that is true, someone should be researching the Mental Health Act to establish who is entitled to "section" the Foreign Secretary, based on Perry de Haviland's theory (set out in a comment to this post) that "there may come a time when the desire of statists to control others is recognised as the mental disorder it is."

I really do think that when an individual, usually with a life as screwed-up as anyone else's, exhibits a consistent desire to control the behaviour of strangers, it is a form of mental illness. These people need help.