Watching the odious Yasmin Alibhai-Brown on 18 Doughty Street last night reminded me of this article. This nasty, intolerant woman, who dismisses all of right-wing views with the words "...there will always be idiots...," has made a career out of trashing the nation which took her family in when it was expelled from Uganda.

She is very fond of finding "racism" in our attitudes, but this story reveals the reality. Those who cry "racist" often do so cynically as part of a conscious or unconscious demand for privileged treatment. Muslims who demand the "right" to ignore the customs and courtesies of the majority population are, in effect, demanding privileges. Such is the fear of being tagged "racist," it is usually easier to submit.

This has long been a successful strategy. But such people engender racism where there was none. The backlash against Muslim special pleading which is currently underway is - in most cases - carefully modulated by a desire to avoid racism. There is a danger however, that the resentments engendered by the tactics of people like Yasmin Alibhai-Brown will boil over into the real thing.

Guido, the [as yet] untold story

According to my RSS aggregator, the item below was just published on Guido Fawkes' blog. So where did it go?

Guido predicts that Detective Superintendent Graham McNulty will soon be saying the words: "Anthony Charles Lynton Blair you do not have to say anything. But it may harm your defence if you do not mention when questioned something which you later rely on in court. Anything you do say may be given in evidence."

PS: It should appear in some form or other shortly. He is "refining" apparently.

I have nothing to add to what Ms Khan has written. She is a brave woman. Her article makes me ashamed of having taken so much care to steer around the truths she has written for fear of giving offence. Our cultures can only co-exist in peace when we are able to talk frankly to each other. I am grateful to her.

I am also, to my surprise, grateful to Jack Straw. I dislike the man and disagree with his politics. I suspect he started this debate quite cynically, but he may - by accident - have done some good. He has stimulated an honest debate and has, by giving Ms. Khan the chance to state her view, revealed that Britains' Muslims do not - as many feared - think and act as a radical whole.

Thirty-odd years ago, I was one of two supporting actors in a touring youth theatre production who wore masks throughout our performances. We developed a cruel game (we were just 17 and pulling legs off insects had only recently ceased to be amusing). From offstage, before our longest scene together, we would pick the prettiest girl in the audience. During that scene as we stood, masked, flanking the leading man, we would both fix our gazes on her.

The scene lasted about 15 minutes. No girl lasted more than 5. They all had to leave the theatre. I am sure they could not have said why, but they found it profoundly disturbing. Perhaps, in those cultures where full veils are routinely worn, it is not disturbing to be looked at from behind a mask. In our culture, it is.

Civilised Britons have proved themselves more than willing to respect the customs from other cultures brought to our country by immigrants. We have gone to far greater lengths to do so than perhaps any other nation. The point Jack Straw is making; very gently, very carefully, is that British citizens from those other cultures have a reciprocal duty to respect ours. I made that point yesterday on a British Muslim blog, only to be told - in effect - that we have no culture to respect. Charming.

Excuse me while I paint a "behead all those who disrespect British culture" banner, and retire, ululating my discontentment, to Trafalgar Square. Not.

This seems to surprise Iain. It does not surprise me. This blog began because I felt I could not be silent about the police state that Labour seems determined to build. I am still waiting, anxiously, for the Tories to show some concern or even some understanding of the nature of the threat.

Sadly, Iain is the most prominent Tory to do so, so far.

The winners and losers of modern Russia

Link: BBC NEWS | Programmes | From Our Own Correspondent | The winners and losers of modern Russia.

I am not breaking my permanent rule about avoiding comments on Russian politics. I am a guest in Russia, and one does not criticise one's hosts. I will merely observe that the Russians are doing their best in difficult circumstances to retreat in an orderly fashion from the path they followed for 80+ years.

Continue reading "The winners and losers of modern Russia" »

One of Two Lions 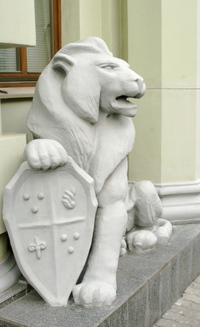 One of two lions guarding the entrance to an apartment block in Central Moscow.

Straw: Is He Really In The Wrong?

Link: Cynical Chatter From The Underworld - Straw: Is He Really In The Wrong?.

This is unbelievably clever politics from New Labour. Jack Straw has said nothing that could be criticised as racist. He has respected the wishes of women who want to wear the full veil. Only the most crazed fanatic could complain that he politely asks if they would mind removing it to talk to him. But he knew he could count on a ready supply of such people. Without doing anything real, he has managed to distance his Party from its longstanding dhimmitude and provoke reputation-enhancing denunciations from the loons of "Respect" and the MPAC.

Again, I don't think Cameron is wise to fight them on their own ground. These guys are really good at the wicked, deceitful games that they play.

David Cameron is interesting. “Optimism,” he says, is the word that defines him. He admonishes Conservatives, warning us not to look back.

As we age (I will be 50 next year) we acquire wisdom, cynicism and the problem of how to tell one from the other. I constantly check myself before posting here to ask “is this realistic, or are you just one of the grumpy old men you used to despise?” Having daughters who are young adults helps. Their reactions often answer my question.

Only recently I was denounced as a "climate change denier" (an irritating phrase, with its obvious attempt at subconscious association with "holocaust denier"). The Green doing the denouncing scoffed that it's now equivalent to being a flat-earther. That's annoying. I wasn't denying the climate was changing. It is. It always is. I was just suggesting that the causal link to human activity was unproven.

The "Proceedings of the Royal Society A, October 3rd, 2006. Full title: ‘Experimental evidence for the role of ions in particle nucleation under atmospheric conditions’. Authors: Henrik Svensmark, Jens Olaf Pepke Pedersen, Nigel Marsh, Martin Enghoff & Ulrik Uggerhøj" seem to suggest that I may be right and the self-righteous prat in question wrong.