SEAL falls on grenade to save comrades - Yahoo! News

Link: SEAL falls on grenade to save comrades - Yahoo! News. 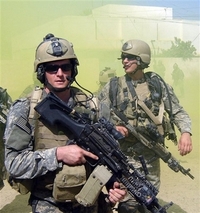 If Michael A. Monsoor (left) was a Petty Officer, 2nd Class what on Earth must a 1st Class Petty Officer be like? We who sit complacently in our living rooms debating the rights and wrongs of war should remember that it means men like this, superb human beings, end up proving their worth in hellish ways.

The greatest threat to our liberty at this moment is the religion of Islam. It seeks to destroy our liberty directly. Our useless governments are, by using the "War on Terror" as a pretext, allowing it to do so indirectly.

It has been recognised as a powerful illiberal force by the familiar enemies of freedom. That is why you will find self-styled "progressives" marching shoulder-to-shoulder with fundamentalist reactionaries who despise everything for which the progressives claim to stand. Each side thinks the other is made up of useful idiots. Only time will tell which side is right.

I have tried to engage British Muslims in debate over at the MPAC-UK site recently. So far the best I have experienced is incomprehension. One semi-literate charmer, alerted to the views of a fellow-Muslim who wrote in The Times on the veils debate dismissed her with the words:


A few words about Saira Khan: she drinks, she never prays, she never goes to mosque, and furhtermore she is married to a kuffar [a non-Muslim fellow citizen of said charmer]. Conclusion, she is an infidel, an enemy of Islam, and must be terated as such

I can only imagine what the MPAC moderators are filtering out from its site's comment threads.

Mike Monsoor was a good man; just a young American with a sense of humour and a love of life. His death to preserve life is the moral antithesis of the barbarous suicide bombings that illustrate the true nature of the evil we face.

How many such young heroes are we prepared to sacrifice before we abandon our ridiculous, happy-clappy "multicultural" illusions? We have sacrificed every last scrap of our dignity in pursuit of these myths, tolerating intolerance itself - and worse. Asian girls in Britain, for example, have a "suicide rate" three times higher than the average. I would bet that those of Chinese or Indian descent don't suicide more frequently than usual. If I am right, the suicide rate among the Muslims in the group must be even more appalling. Either they are being oppressed into despair, or they are being slaughtered in "honour killings" passed off as suicides, which our police are afraid to investigate, for fear of being called the worst of all bad names; "racist".

We have behaved as if we have no culture or values to defend. We do. We can debate whether Iraq was the right place to start that defence. I think most would now agree it was not and/or that the post-invasion politics have been handled incompetently. However, it would never have happened without Islamic terrorism from within Western Muslim communities. Like it or not, honourable men like Michael A. Monsoor are defending our values and putting many of us to shame in the process.

"Greater love hath no man than this, that he lay down his life for his friends. John 15:13"

H/T Iain Dale. I commend you for your courage in putting this YouTube video on your site, Iain. It reminded me why I first became involved in politics too. There is not a word on there which is not anathema to the Camerloonies though, so I fear for your Parliamentary career.

Margaret Thatcher converted me from Maoism to Conservatism. Suspended from my secondary school for my revolutionary activities, I went on as chairman of my University Conservatives to be among the first people in Britain to call himself a Thatcherite. She spoke to the aspirations of the working classes (as opposed to the non-working underclasses) of our country in a way that no Labour leader has done since the 1940's.

Don't get me wrong. Margaret made many mistakes, not least in failing to do to the Leftist educational establishment what she did to the Trade Unions. That missed opportunity may yet prove fatal to our status as a civilised country.

Despite all that, and despite that fact that she is not fully a libertarian, she gave me 10 years of hope that my country might have a future. For that I am happy to salute her, and humbly thank her.

David Cameron has so far, by coming out against ID Cards, given me about 30 seconds of hope. I plan to live long enough to give him chance to match her. One of my daughters has just - to my surprised delight - joined the Conservative Party. If one day she is blessed with children, I hope Cameron does enough to have one of my grandchildren named after him as she was named after Margaret. I see no sign of it yet.

So he'll be clearing his desk then, obviously.

The blogosphere is enjoying the Government's embarrassment. I think Sir Richard should be fired. He is entitled to his views, but the Army exists to defend the realm and to implement with deadly force the foreign policy of the elected government. He has a positive duty to make his views known to his political masters. As Chief of the General Staff, he will have had ample opportunity to do so. For him to criticise that policy in public is disloyal, to say the least.

There are two possible justifications. One would be if the Government has been trying to use him to make propaganda. If he was ordered to give the interview, then I would entirely respect him for telling the truth as he sees it. This government has "form" for that, at least in relation to the police. Chief Constables have long been reduced to Government mouthpieces and have done themselves no credit by their willingness, nay eagerness, to play politics. They have lost the respect of the public and put an end to "policing by consent." Sir Richard would be right not to make the same mistake on behalf of the Army.

The second would be if he was authorised by his Commander-in-Chief, the Queen. If Her Majesty has tipped him the wink, however, that would amount to a constitutional crisis of the first order. Like my glorious namesake, I am a Republican. Much as I like and respect Her Majesty personally (unlike her idiot heir) I must hope that she, normally so acute, has mis-stepped. That would damage the monarchy as much as Sir Richard's remarks will damage the Government.

Executive summary: by a fluke, the Government's secret police have been caught out giving contradictory evidence in secret trials involving terrorist suspects. One set of evidence (at least) was a pack of lies.

Only Shami Chakrabarti, as usual, speaks out. Fellow bloggers on the political right consistently attack this woman, who sometimes seems to be the last sane and truthful person in Britain's public life. I have seen her described, by a usually sound blogger whose blushes I will spare, as a "friend of terrorism."

I declare my interest. I am a member of Liberty, the organisation she leads. Anyone who reads this blog with any kind of approval should join.

I could cry to see it traduced by those who should know better when it stands almost alone against the totalitarian tide. It is consistently sound on civil liberties, free and fair trials, ID cards and most issues enemies of the over-mighty state should care about.

What does it take in Britain for heads to roll? Who was in charge of the security services when these lies were told? Can we deport them to some torturing regime or other? Please!?

The Mufti of Jerusalem and Friends

Here is an excerpt from a German TV documentary, which demonstrates how little right Muslims have to use that particular term of abuse against people who sacrificed much to oppose Nazism.

This is where the logic of outlawing "Holocaust denial" takes us. If it's illegal to deny one atrocity, why not another? While I despise the current fashion for apologising for history, I have some sympathy with the Armenians. They are understandably infuriated by modern Turkey's refusal to acknowledge its past.

However, passing such laws is a mistake. Everyone should be entitled to state their point of view, however vile - whether it be the Islamic world's routine Holocaust denial or Turkey's denial of this massacre.

Am I too cynical to suspect that the real reason French deputies voted for this was to scupper Turkey's entry to the EU without actually having to state their politically-incorrect reasons for objecting to it?

Do read this post on Samizdata. Not just because the author makes a good point about the ideological flabbiness of the Daily Telegraph these days, but because of the amusing comment by Perry de Haviland.

Secure mental hospitals for those with a compulsive psychological need to impose compulsion on others would be a great idea. We owe it to ourselves to help these vulnerable member of society.