Reid on the attack in missing terror suspects row

How long are we going to allow John Reid and his like to get away with such political scams? THEY introduced control orders; a form of house arrest. Having taken these shocking powers they have used them incompetently. No surprise there.

We should be glad that this Government is as incompetent as it is illiberal. If your Government has oppressive powers, your only hope is that it is poor at using them. However, surely only New Labour would dare use its incompetence as a reason to demand even more power?

The Trades Union Congress in Poland

Brendan Barber, TUC General Secretary, said: “It’s vital that Poles and other migrant workers know their rights before they come to work in the UK. Otherwise they risk becoming sitting ducks for employers who delight in making money out of exploiting vulnerable workers."

After enduring 50 years of Communism, the Poles will know exactly what to make of that kind of 19th Century talk. When it comes to "exploiting vulnerable workers", Brother Barber, they know there is nothing like a Socialist State and its trade unionist lackeys.

David's observation is interesting. Three of the top ten websites in the would-be Socialist Peoples' Republic of Scotland are not merely conservative, but libertarian! Maybe it's because Scots live in such a monochrome political culture that libertarians stand out like blood in the snow? Those sites are attracting the interest of the curious, but are they changing many minds?

For a Scot not to be Socialist is a social embarrassment. That's appalling in the land that gave us Adam Smith. I am afraid it's also a sign of dependence. Scottish Socialism is really just another way to hate the English; all those public sector jobs with no exposure to market realities are only made possible by the Union.

If Scotland stood alone (really alone, not leeching from net contributors to the EU budget as a poorer member state), it would have to develop its own wealth-creators and their interests would be aligned with those of the new nation. That's one of the best arguments for Scottish independence. It would allow the Scots to join the real world. It's also one of the best arguments against the EU, which is creating "Scotlands" all over the continent.

I ceased to be a Unionist a few years ago at the Wallace Memorial, as I listened to a "ned" (Scottish for chav) explain its significance to his toddler in terms so blood-curdling as to have landed him in jail if spoken of Jews or Muslims. I looked at the nice little boy innocently drinking it all in and thought "He will hate the English after I am dead. This Union is going nowhere."

It would be good to have civilised dealings with people that - so I hear from American and French friends - are perfectly capable of them.

Libertarian and conservative thinking in Scotland will never develop without Scottish independence. Judging by how long real ex-colonies go on blaming the English for their ills, even then it will take more than a century. The Scots' obssessive feelings of resentment towards England, justified or not, drive out all good things. It's very sad. I hope my great-grandchildren will get to meet a citizen of an independent Scotland who can see something in them other than their Englishness.

I read this while half watching some dimwit environmentalist on Sky News saying we must stop flying so much to prevent climate change. Obviously that's where the Martians are going wrong.

Such situations are what we get (and perhaps even what we deserve) when we pass from treating people fairly to discriminating in favour of "victim" groups. Every time in future we hear a proposal for "positive discrimination", hear sentimentalism about victimhood or hear about candidate "A lists" that put minority status over competence, we should picture David Blunkett screaming down the phone demanding slaughter.

It does not surprise me that he did not care about the lives of prisoners, prison officers, or bystanders. Socialists only "care" about humanity in the abstract. They usually find any actual specimens they encounter profoundly irritating. Their "caring" is a political stance, not something they feel in their hearts. Consider recent stories of elderly working class people dying with maximum indignity, lying neglected in their own piss and shit in their hospital beds. Were Socialists more concerned about those poor people or the reputation of the NHS?

Blunkett will have seen this prison riot as a perfect chance to prove his toughness. That's how he uses the incident in his memoirs. Now as then, he does not see people in danger. He sees political opportunity.

I know this is not how we are supposed to conduct politics in Britain. The convention is that we accept our political opponents are well-meaning. I am sorry, but I grew up under Labour in a Labour rotten borough in the North-West and that is not how I experienced them. I experienced corruption, arrogance and contempt for a working-class that was believed to be theirs to deploy as they pleased. If they could have obstructed my life chances and kept me there as an embittered activist in their ranks, they would have done it. They have done it to many young people since. Without Margaret Thatcher's inspiration, they might have done it to me. No wonder they - and all who love the cosy status quo of the British class system - hate her.

If this account of Blunkett's conduct is true, how can we pretend he was "well-meaning?" What do they have to do before we scrap this ridiculous convention and take off the political gloves? Consult your consciences, dear fellow-Conservatives, and ask yourselves would you still be polite if Mr Narey had taken Blunkett at his word?

How to win friends and influence people

I detest Labour with all my heart because I grew up in a Labour rotten borough; know how arrogant, condescending and corrupt the Labour "Movement" is and have experienced the education system it designed in order to preserve its underclass voter-base by denying them opportunities.

Nothing I could say about Labour, in all my profound contempt, could possibly match the impression given here as this Oxbridge prole bullies a female presenter.

I don't give a damn about his spoof of David Cameron. Nor, I am sure, does Cameron himself. The hostility of such an idiot is a pearl beyond price. But this interview shows him up for exactly what he is; an arrogant bully who thinks he knows better than everyone else.

That, ladies and gentlemen, is the practical definition of "Socialist"

Absolutely spot on. If you don't get the joke, you are either a Muslim (or a New Labour) fanatic, so who cares?

People often confuse law and justice. Not all laws are just. Not all justice is lawful.

Since Labour came to power, we have had a lot of law and very little justice. They have, on average, criminalised one new activity per day in office. Meanwhile, Gordon Brown has got away Scot-free (oh how we wish we were Scot-free) with more than 100,000,000 from the nation's pension funds.

If some of them go to jail over "cash for honours" corruption, that will be an unusual, but happy, combination of law and justice. Those who live by the sword, shall perish by the sword.

I would like to see them do the perp walk conga style, led to a "fourth way" in politics (the way to gaol) by the man who led them to the third.

The Cost Of Belief

John East has made a grim, but interesting, calculation of the death toll of Muslims in conflict since WWII. Read it. You may be surprised. 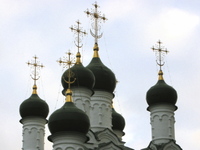 Winter began today in Moscow. I went out with just a sweater for warmth and was given many disbelieving stares by well-wrapped-up Muscovites. By the time I had walked a mile or so, I realised they were right. This is a picture of the nearest church to my home, silhouetted against a cold sky at 1730 today.